“If this is confirmed, this is huge for the Korean Peninsula.” 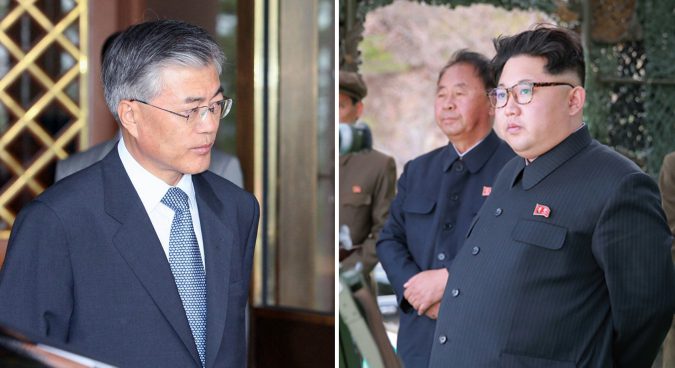 Technically, North and South Korea are still at war, and have been for more than six decades—but an “absolutely earth-shaking” new report on Tuesday indicates the conflict may soon be coming to an end.

Citing an anonymous South Korean diplomatic official, Munhwa Ilbo—a South Korean daily newspaper—reported that the neighboring countries are hashing out a statement that could officially bring the war to an end later this month, when North Korean leader Kim Jong-un and South Korean President Moon Jae-in are set to meet in person for the first time.

Kim and Moon could also discuss returning the heavily-fortified demilitarized zone separating them to its original state, the newspaper said.

Pyongyang and Seoul have technically been at war since the 1950-1953 Korean conflict ended with a truce—and not a peace treaty. Geopolitical tensions have occasionally flared up since the armistice, although to date both countries have managed to avoid another devastating conflict.

A successful summit between the Koreas later this month could help pave the way for a meeting between Kim and President Donald Trump. The U.S. president and North Korean leader are poised to hold talks in late May or June, according to the Korean Central News Agency (KCNA).

The groundbreaking report comes as Kim has increasingly expressed his willingness to discuss denuclearization of the Korean Peninsula—an openness that foreign policy experts have attributed to South Korea’s “masterful” diplomacy, not President Donald Trump’s “fire and fury” threats and warmongering.

Korea experts and journalists argued that if the new report is true, it is major news for the Korean Peninsula and a crucial step toward establishing permanent peace in the region.

If this is confirmed, this is huge for the Korean Peninsula. North and South Korea are still technically at war and have not signed an official peace treaty, just an armistice agreement https://t.co/Fci1siZYuz

Editors’ note: On Tuesday evening, the Washington Post broke the news that CIA director (and Secretary of State nominee) Mike Pompeo traveled to North Korea over Easter weekend to meet with Kim Jong-un. We’re surprised that this administration’s managed to keep the meeting a secret for two weeks, and must ask why this wasn’t worth sharing with the American people at a time when fears of war are heightened. We’re also concerned that we have no public record of what they talked about..