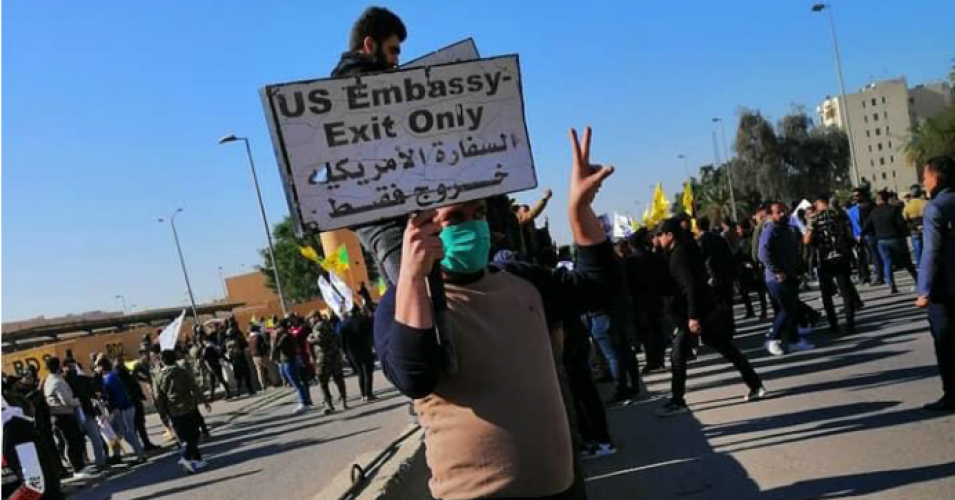 “Iran killed an American contractor, wounding many,” Trump tweeted. “We strongly responded, and always will. Now Iran is orchestrating an attack on the U.S. Embassy in Iraq. They will be held fully responsible. In addition, we expect Iraq to use its forces to protect the Embassy, and so notified!”

Trump’s tweet closely mirrored Sen. Marco Rubio’s (R-Fla.) response to the embassy protests. “Iran is directly responsible for orchestrating the storming of the U.S. Embassy in Iraq and must be held accountable for it and the safety of every American serving there,” tweeted Rubio, a longtime supporter of regime change in Iran.

U.S. airstrikes on targets in Iraq and Syria on Sunday killed at least 25 fighters and injured dozens more. While the Pentagon and Trump claimed Iran was behind a rocket attack on an Iraqi military base last week that killed an American contractor, Iran denied responsibility and condemned the U.S. airstrikes as a “clear example of terrorism.”

Thousands of Iraqis smashed through a checkpoint and converged on the U.S. Embassy in Baghdad on Tuesday to protest the Trump administration’s deadly airstrikes over the weekend and demand that American troops and diplomats leave the country.

Matthew Tueller, the U.S. ambassador to Iraq, and members of his staff were reportedly forced to flee the building as the embassy protests intensified.

According to Reuters, “some protesters threw stones at the gate while others chanted, ‘No, no, America! … No, no, Trump!'” Demonstrators said they intend to remain outside the embassy until it closes.

Washington Post journalist Liz Sly, who is on the ground covering the protest, called it a very “dangerous situation” as tear gas was fired at demonstrators and some reported hearing gunshots.

“This may be the beginning of the end for the U.S. occupation,” tweeted one observer.

IRAQ: Scene outside the US embassy in Baghdad as more protesters arrive in the wake of US retaliation airstrikes against Katai’b Hezbollah positions. – @KARRARISMAILM pic.twitter.com/kKmIevmQ89

The situation in front of US Embassy in Baghdad.
Two security posts burned by Hashd al-Shaabi. #Iraq pic.twitter.com/hxig50aFSK

Another video from the US Embassy in Baghdad

Meanwhile multiple reports say at least a dozen injuries outside the Embassy, some say due to smoke bombs fired by the US security pic.twitter.com/J2wyKSGzl7

The Pentagon said Sunday’s airstrikes against the Iraqi Kataib Hezbollah militia were retaliation for rocket attacks that killed an American contractor. The U.S. strikes, which hit targets in Syria and Iraq, killed at least 25 people and injured dozens more.

The bombing campaign sparked swift condemnation from Iraqi leaders and warnings of a devastating proxy war between the U.S. and Iran, which the Trump administration says is funding and arming Iraqi militias.

Iraqi Prime Minister Adel Abdul-Mahdi on Sunday called the U.S. strikes “a violation of Iraqi sovereignty and a dangerous escalation that threatens the security of Iraq and the region.”