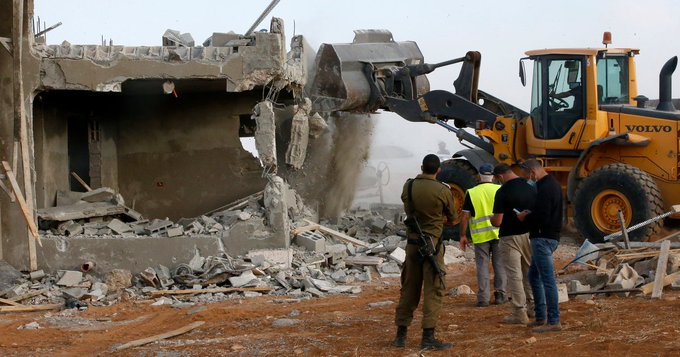 Just hours before the cold front rolled through the West Bank, Israel Defense Forces troops razed the Bedouin hamlet of Khirbet Humsa, near Tubas in the Jordan Valley, forcing 74 people including 41 children—one just three months old—out into the approaching storm.

The United Nations Office for Coordination of Humanitarian Affairs (OCHA) called the destruction of the community’s 76 structures the largest single West Bank demolition in a decade.

The IDF soldiers “completely uprooted everything,” Ayman Gharib, an activist with the Popular Resistance Committees, told Middle East Eye, adding that it was “basically anything that these people need to live and survive.”

“They did not even take into consideration the humanitarian side, that there are babies, children, elderly people, and women who have spent their night homeless, under the rain,” Gharib said of the Israeli soldiers.

“The same goes for the animals, the sheep and cattle, who also spent the night under the rain,” he added.

“The destroyed properties—including homes, animal shelters, latrines, and solar panels—were essential to [the] livelihoods, wellbeing, and dignity of community members, whose rights have been violated,” Helle said Wednesday.

“Their vulnerability is further compounded by the onset of winter and the ongoing Covid-19 pandemic,” she added. “Some of the demolished structures had been donated as humanitarian assistance.”

“Then they told us to start evacuating, and they began emptying all of our belongings outside” https://t.co/t3fAu99IWT

Along with the troops, a busload of Israeli Civil Administration officials removed the villagers’ possessions before destroying their homes and other property. Numerous vehicles, including tractors and at least one car, were confiscated.

The hamlet’s 11 families were forced to sleep out in the cold with only a small tarpaulin for cover.

Khirbet Humsa residents described the harrowing experience of being forced from their homes by Israeli occupation forces.

“We were about to have lunch when bulldozers suddenly arrived, at 11 in the morning,” Aisha Abu Awad told Middle East Eye as she cradled her crying 3-month-old granddaughter.

“Military jeeps and soldiers, they surrounded us,” Awad added. “Then they told us to start evacuating, and they began emptying all of our belongings outside.”

Demolitions have displaced almost 900 Palestinians this year. Most are destroyed for not having Israeli permits, which the UN says are “impossible” for Palestinians to get. pic.twitter.com/HdORIURVWr

Displaced resident Yasser Abu al-Kbash told NPR that he is “99% certain this was taking advantage of the U.S. elections.”

“[The IDF] bulldozed everything,” the 48-year-old shepherd said of Khirbet Humsa, his lifelong home.

“The wiping off of a whole community at once is extremely rare, and it seems like Israel was making use of the fact that everyone’s attention is currently set elsewhere to move forward with this inhumane act,” the group told Agence France-Presse.

The destruction of Khirbet Humsa, which has suffered Israeli home demolitions in the past, is part of Israel’s systemic policy of destroying Palestinian homes—and in the case of Bedouins, entire villages—to expel the native population to make way for new or expanded settler colonies exclusively for Jewish residents.

One Bedouin village in the Negev Desert, Al-Araqeeb, has been destroyed by Israeli forces at least 139 times.

The Gaza-based Palestinian Centre for Human Rights condemned the razing of Khirbet Humsa as part of Israel’s “annexation and settler-expansion schemes” that “can only be considered an act of ethnic cleansing against the indigenous Palestinian population.”

OCHA said that so far this year, 689 Palestinian structures have been demolished throughout the West Bank, already more than in any full year since 2016.

Some 869 Palestinians have been made homeless by these demolitions, which Helle said “are a key means of creating an environment designed to coerce Palestinians to leave their homes.”

“I remind all parties that the extensive destruction of property and the forcible transfer of protected people in an occupied territory are grave breaches of the Fourth Geneva Convention,” Helle said.

“While assuring that the humanitarian community stands ready to support all those who have been displaced or otherwise affected, I strongly reiterate our call to Israel to immediately halt unlawful demolitions,” she added.