“Today’s orders make certain that the Interior Department is no longer going to serve as a rubber-stamp for the coal and oil and gas industries.” 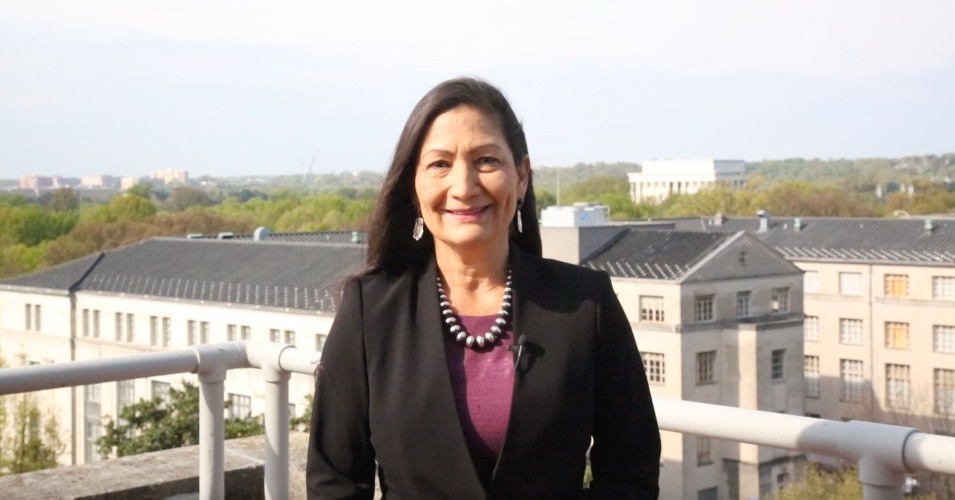 “Today is a watershed moment in the history of the U.S. Department of the Interior,” declared Jeremy Nichols, climate and energy program director for WildEarth Guardians. “With Secretary Haaland’s actions today, it’s clear the Interior Department is now working for communities, science, and justice. We are grateful for her leadership and bold action to put people over polluters.”

“Today’s orders make certain that the Interior Department is no longer going to serve as a rubber-stamp for the coal and oil and gas industries,” said Nichols. “Secretary Haaland’s actions set the stage for deep reforms within the Interior Department to ensure the federal government gets out of the business of fossil fuels and into the business of confronting the climate crisis.”

This is what happens when the person in charge of public lands isn’t an oil lobbyist.https://t.co/HIUfgANl8c

Secretarial Order 3398 (pdf) rescinds a dozen orders issued under the Trump administration which an Interior statement collectively described as “inconsistent with the department’s commitment to protect public health; conserve land, water, and wildlife; and elevate science.”

Haaland’s other measure, Secretarial Order 3399 (pdf), establishes a departmental Climate Task Force that will identify policies needed to tackle the climate emergency, support the use of the best available science on greenhouse gas emissions, implement the review and reconsideration of federal gas and oil leasing and permitting practices, identify actions needed to “address current and historic environmental injustice” as well as “foster economic revitalization of, and investment in, energy communities,” and work with state, tribe, and local governments.

The department also noted that “the solicitor’s office issued a withdrawal of M-37062, an opinion that concluded that the Interior secretary must promulgate a National Outer Continental Shelf Oil and Gas Leasing Program consisting of a five-year lease schedule with at least two lease sales during the five-year plan,” which allows DOI “to evaluate its obligations under the Outer Continental Shelf Lands Act.”

Today, @SecHaaland revoked a dozen pro-Big Oil and anti-environment orders from the Trump administration. Little by little the toxic Trump environmental legacy is being overturned. https://t.co/7NcoLtlk7w

Haaland—a former congresswoman and first-ever Native American Cabinet secretary whose confirmation was celebrated by climate campaigners, Indigenous leaders, and various progressive advocacy groups—said Friday that “from day one, President Biden was clear that we must take a whole-of-government approach to tackle the climate crisis, strengthen the economy, and address environmental justice.”

“At the Department of the Interior, I believe we have a unique opportunity to make our communities more resilient to climate change and to help lead the transition to a clean energy economy, Haaland continued. “These steps will align the Interior Department with the president’s priorities and better position the team to be a part of the climate solution.”

“I know that signing secretarial orders alone won’t address the urgency of the climate crisis. But I’m hopeful that these steps will help make clear that we, as a department, have a mandate to act,” she added. “With the vast experience, talent, and ingenuity of our public servants at the Department of the Interior, I’m optimistic about what we can accomplish together to care for our natural resources for the benefit of current and future generations.”

Haaland’s orders were welcomed by environmental and climate groups as well as other critics of fossil fuel development on public lands and in federal waters.

Kristen Miller, conservation director at Alaska Wilderness League, said the orders “are another important step toward restoring scientific integrity, meaningful public process, and the longstanding stewardship responsibilities for America’s public lands and waters at the Department of Interior. This is the type of bold and visionary leadership we need if we’re to effectively fight climate change, tackle the extinction crisis, and prioritize environmental justice and tribal consultation.”

“We applaud the secretary’s actions to ensure meaningful consultation and elevate strong science, especially around climate change, into decision-making across the department,” Miller added. “And we thank the secretary for reversing the Trump administration’s energy dominance agenda in the Arctic Ocean and the National Petroleum Reserve – Alaska, and look forward to working with her on a different management direction for the western Arctic that focuses on addressing the climate crisis and protecting its extraordinary wildlife habitat, biodiversity, and cultural values.”

Environment America public lands campaign director Ellen Montgomery said that “Haaland is building on President Biden’s strong start by restoring conservation as a priority for the Department of the Interior. Our public lands and waters should be protected for the sake of the wildlife and people who depend on them. They should not be mined and drilled to extract fossil fuels—an antiquated 20th century pursuit that pollutes our air and makes climate change worse.”

“The Interior Department is in a powerful position to drive bold action for the climate in the United States,” said Nichols of WildEarth Guardians. “Haaland’s actions today confirm that President Biden and his administration are seizing the opportunity to rein in fossil fuels and make climate action and climate justice a reality.”

“We can’t have fossil fuels and a safe climate and today’s orders take a major step forward in acknowledging and acting upon this reality,” he said. “If we truly have any chance of protecting peoples’ health, advancing economic prosperity, and achieving environmental justice, we have to start keeping our fossil fuels in the ground.”