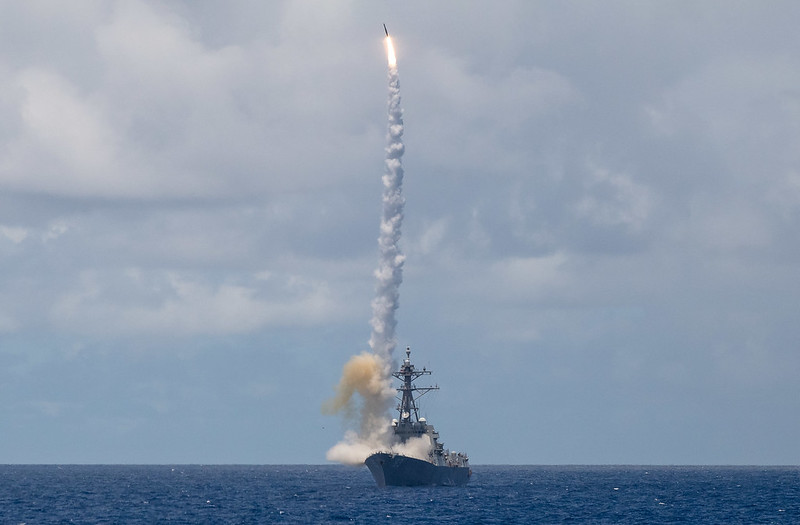 The Air Force’s proposal is consistent with other investments outlined in Biden’s Pentagon budget request, including billions of dollars for U.S. nuclear weapon modernization and the so-called Pacific Deterrence Initiative, which is purportedly aimed at “countering China’s military build-up in Asia.”

The service has requested $161 million to buy an initial production of 12 Air-launched Rapid Response Weapon, or ARRW (pronounced “Arrow”), hypersonic weapons to move it out of the research and development phase. Despite the service shifting more resources toward the ARRW program last year, the missile failed its first flight test a few weeks ago.

The Air Force also wants to increase its procurement of the Joint Air-to-Surface Standoff Missile-Extended Range, or JASSM-ER, stealth cruise missile, an advanced weapon with a range of roughly 600 miles, the budget documents state. Officials have previously stated the JASSM and its cousin, the Long-Range Anti-Ship Missile, or LRASM, can be used for stand-off precision strikes throughout the vast expanses of the Pacific region.

“To fund those efforts,” Pawlyk wrote, “the service will reduce its purchases of Joint Direct Attack Munitions, or JDAMs, the first iteration of the small-diameter bomb, and Hellfire missiles.”

According to Military.com, Maj. Gen. James D. Peccia, the Air Force deputy assistant secretary overseeing the budget at the Office of the Assistant Secretary of the Air Force for Financial Management and Comptroller, told reporters Friday that “the service has reached ‘healthy inventory levels’ of those munitions and now will focus on the more advanced weapons.”

To bolster its inventory of conventional munitions that allow aircraft to stay outside the range of enemy air defenses, the service’s funding request for JASSM-ER, which incorporates low-observable technology, has increased by $211 million “to grow production line capacity.” The Air Force wants to buy 525 missiles this year, up from 400 last year, the budget states.

Dave DeCamp of Antiwar.com wrote Friday that Biden’s $753 billion military budget proposal “emphasizes research for new weapons technology, which the U.S. sees as vital for competition with China and Russia.”

In a statement on the budget, Secretary of Defense Lloyd Austin identified China as the Pentagon’s main focus. “The budget provides us the mix of capabilities we need most and stays true to our focus on the pacing challenge from the People’s Republic of China,” he said.

As DeCamp pointed out, “The budget request asked for over $112 billion for research, development, testing, and evaluation, known as RDT&E. It is about a 5% increase from the 2021 budget and is the highest-ever request for RDT&E.”

U.S. military officials frequently say that investment in technology like artificial intelligence, robotics, space and cyber capabilities, and hypersonic missiles are needed to compete with Beijing in the coming years. Space Force’s top scientist recently said human augmentation to create super-soldiers should be embraced by the U.S.

Chairman of the Joint Chiefs of Staff Gen. Mark Milley explained to lawmakers on Thursday why the Pentagon was focused on research. “We are trying right now to put down payments on investments that are going to pay huge dividends five, 10, 15 years from now for a future force that will be able to compete successfully with any adversary out there, to include China,” he said, according to Stars & Stripes.

Milley warned that China seeks an equal footing with the U.S. military. “They are not our peer or our near-peer just yet, but they are rapidly growing and their objective is by probably the mid-2030s, for sure by the mid-century, to be equal to or greater than the United States military,” he said.

The U.S. currently spends more on its military than the next 10 countries combined, according to the Institute for Policy Studies’ National Priorities Project. Moreover, a recent analysis by the Stockholm International Peace Research Institute found that while China’s military budget increased by 1.9% last year, U.S. military spending in 2020 was 4.4% higher than in 2019.

Last month, a coalition of 66 advocacy groups penned a joint statement expressing their deep concerns “about the growing Cold War mentality driving the U.S. approach to China,” which “threatens to fuel destabilizing arms-racing and risks escalation towards a predictably devastating conflict.”

“The new Cold War with China currently being pushed in Washington does not serve the millions of people demanding change across this country nor the billions of people affected by U.S. foreign policy abroad, and will instead lead to further insecurity and division,” the coalition said. “Worryingly, both political parties are increasingly latching onto a dangerously short-sighted worldview that presents China as the pivotal existential threat to U.S. prosperity and security and counsels zero-sum competition as the primary response.”

“What everyday Americans need to secure their futures,” the groups said, “is not the suppression of the Chinese economy—one that is intimately intertwined with our own—but a fundamental restructuring of our own economy through investments in innovation and green jobs; strengthening labor and raising wages; rooting out systemic racism, sexism, and inequality; and ensuring affordable healthcare, housing, education, and a livable planet.”

“More broadly,” the coalition added, “the prosperity of working people in the United States and China alike demands building a more equitable global economy that maximizes human wellbeing overall rather than corporate profits.”