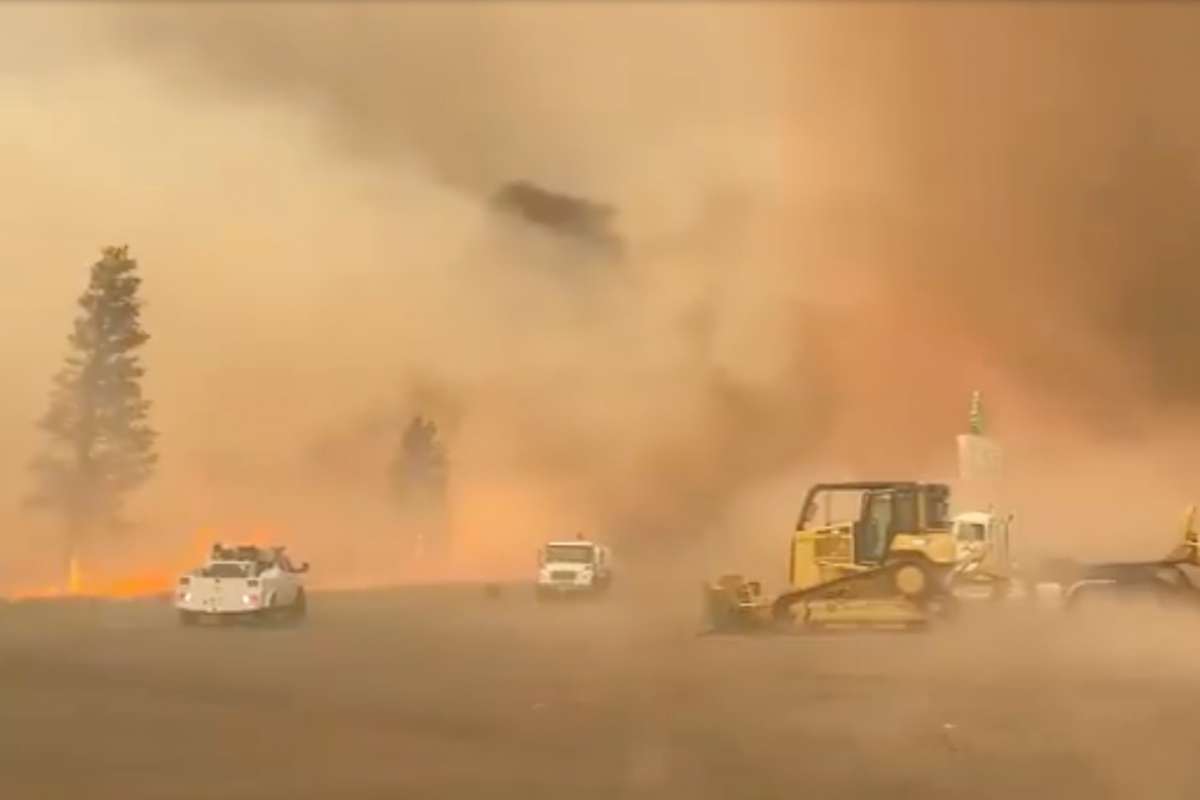 “This is what bipartisanship looks like,” tweeted Warren Gunnels, currently the staff director for the U.S. Senate Budget Committee, which is chaired by Sanders.

According to the Los Angeles Times:

The U.S. Forest Service captured video of a fire whirl—a “spinning vortex column of ascending hot air and gases rising from a fire”—on June 29 at the Tennant fire in Klamath National Forest, near the Oregon border.

In the astonishing video, thick black smoke quickly gathers and spins near flames, almost completely obscuring a rescue truck in the distance.

The tweet from Gunnels—who has served as congressional staff for Sanders and advised on policy for his presidential campaigns in both 2016 and 2020—comes as a protracted battle in the U.S. Senate around an infrastructure package has largely centered on the willingness of lawmakers to recognize the existential threat of the climate crisis and how much funding will be included for a rapid transition away from fossil fuels.

With scientists and experts pointing to extreme weather events like “firenados” and the recent record-shattering heatwave in the Pacific Northwest last week—or fossil fuel disasters like the one last week which led to the fiery “gates of hell” to open on the surface of the Gulf of Mexico—frustration is growing in progressive circles that President Joe Biden’s obsession with a bipartisan solution on infrastructure with bad-faith Republicans is a dead end politically and for the planet.

Writing for Gizmodo last week, climate journalist Brian Kahn explained that “bipartisanship” in the context of the planetary emergency is simply “climate denial” at the worst possible time. Kahn wrote:

The backslapping bipartisan we’ve seen does not offer up transformational change. Biden’s opening bid of $2 trillion for infrastructure already lacked the money to meet the moment. The bipartisan version is a shell of that already inadequate policy push. Biden’s plan included $174 billion for electric vehicles. The bipartisan plan offers $15 billion. The American Jobs Plan had $85 billion earmarked for public transit. The Joe Manchin-Bill Cassidy special offers $48.5 billion. The only areas where the two bills are roughly on par are related to highways and airports, both of which lock in decades of more carbon pollution.

The idea that the ideal policy position to address climate change sits squarely between left and right is like saying the best place between the edge of a cliff and thin air 10 feet out is 5 feet beyond the brink. Choose the middle ground, and you will still fall to your death.

While a group of Republican and Democratic senators has gained much attention in recent weeks by trying to negotiate a deal that will appease a corporate-friendly subset from both parties, Sanders and other progressive members of the Senate are pushing for a large reconciliation package with a much bolder vision to tackle the climate crisis head-on.

“Let me be clear,” Sanders tweeted last week. “There will not be a bipartisan infrastructure deal without a reconciliation bill that substantially improves the lives of working families and combats the existential threat of climate change. No reconciliation bill, no deal. We need transformative change NOW.”

In his assessment, Kahn—dismissive of the jovial politics of bipartisanship in which getting along or finding common ground is the goal—concluded: “Climate policy isn’t about imagining a spectrum from left to right and finding the sweet spot in the middle. It’s a zero-sum battle with physics that doesn’t give a damn about who’s laughing with whom.”