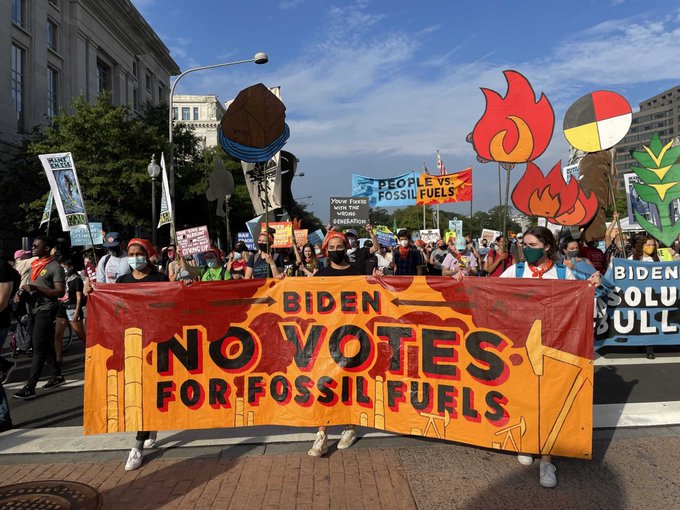 More than 90 people were arrested Friday as Indigenous-led activists peacefully marched on the U.S. Capitol under banners with slogans including “we did not vote for fossil fuels” and “Biden, real solutions, no bullshit,” while protesters called on Biden to declare a climate emergency. The Build Back Fossil Free coalition, which organized the mobilization, said Friday’s arrests brought the week’s total to 655.

“Corporations raised you up, but we will make you fall,” demonstrators sang—apparently targeting Big Oil-backed members of Congress—as they blocked one of the Capitol’s parking lots. “You picked a war with a generation, does it weigh on you at all?”

And it begins: Climate activists have started a sit-in at 3rd and Penn, blocking one of the Capitol’s west lots: “Our ancestors are here, our future generations are here.” First and second warnings from police given in quick succession; they’ll arrest on the third. pic.twitter.com/FjlJhJGFK6

Love Hopkins, a 10-year-old member of the Standing Rock Youth Council who in 2016 ran from Standing Rock to Washington, D.C. with other young Indigenous people, said, “We’re not messing around… I came here to stand with my people to give voice to future generations.”

“For years the U.S. government has been lying and giving false hopes to our First Nations people,” Hopkins added. “We want answers and we want them now. If this is the land of the free and the land of opportunity, why can’t we have that? Why can’t we have clean drinking water?”

Morgan Brings Plenty, a member of the Cheyenne River Sioux tribe, said that “there is no other planet to escape to. Water is life… They need to listen to the youth. They need to hear us speak our cries.”

WHAT A POWERFUL WEEK! I’m exhausted, exhilarated, and in total awe of our Indigenous and frontline allies who led this mobilization even as they fight fossil fuel projects at home. Our people, united, will never be defeated! #PeopleVsFossilFuels pic.twitter.com/CJpQj11f0z

Mingyang Wei, a 14-year-old youth leader with Sunrise Movement D.C., said that “it is a shame that we still have to be here. It is a disgrace. How has this been going on so long? It has been going on because corporate greed has taken priority over the value of people in this country.”

Our youth are leading the way.
We must uplift and support them. Today, they are leading us to through the streets of DC after a historic week of resistance. #peoplevsfossilfuels pic.twitter.com/Grhs4GwJhu

Isabelle Marie Knife, an Indigenous #StopLine3 campaigner, said: “Biden promised, just like they’ve done in the past, to bring us to the table, but where’s our seat? We haven’t been heard, they haven’t listened.”

“It takes youth to be on the frontlines to make our voices heard,” she continued. “We are the generation that says enough is enough, we will be heard, we will have a seat at the table. They tell us lies, they come on our lands, they promise this, they promise that.”

“Well, I promise you,” vowed Knife, “we’ve got a new generation coming and we’re not stopping.”