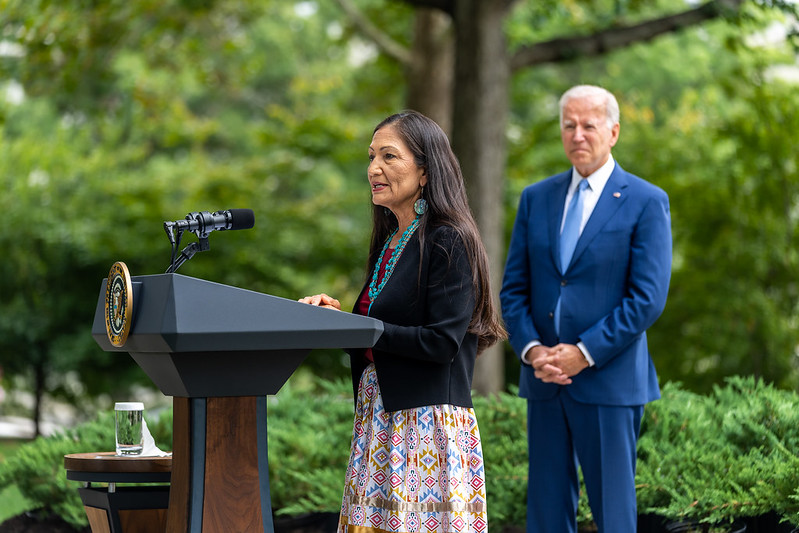 The administration came under fire for not only the contents of the U.S. Department of the Interior report—required by President Joe Biden’s January executive order on “tackling the climate crisis at home and abroad”—but also dropping it on the Friday after a holiday.

“Public records released as a result of this request will shine light on the dangerous chasm separating Biden’s climate promises from his refusal to phase out the use of our public lands and waters for oil and gas extraction,” he said.

McKinnon’s group joined with the Montana Environmental Information Center (MEIC) and Western Environmental Law Center to file a Freedom of Information Act (FOIA) request asking for drafts of the report—including the version sent to the White House—and internal communications about its development.

As a candidate, Biden vowed to end new leases; as president, he took action to halt them—but a federal judge ruled in June that the sales must resume. The Interior report came the same month the administration auctioned off 80 million acres in the Gulf of Mexico.

“This flimsy report abandons Biden’s campaign promise to end new federal oil and gas leasing and drilling. Instead, it recommends but does not require tepid, outdated adjustments to lease bids, royalty rates, and bonding that the Office of Management and Budget has been highlighting for literally decades,” Melissa Hornbein, an attorney at the Western Environmental Law Center, said Thursday. “This type of action is not only long overdue, it is wholly inadequate to tackle the climate crisis.”

The report also came in the wake of the COP26 summit in Glasgow, Scotland, which Biden not only attended but at which he called climate change “the challenge of our collective lifetimes” and “the existential… threat to human existence as we know it.”

“It’s a betrayal to his commitment to the world to decrease methane emissions and then immediately ignore these emissions for oil and gas development on public lands,” she said. “We want to know what went wrong.”

Critiques of the report—which campaigners have called “woefully inadequate” and a “shocking capitulation to the needs of corporate polluters”—have mounted since its Black Friday release.

“This isn’t just a broken promise, it’s outright deceit,” said Jeremy Nichols, climate and energy program director at WildEarth Guardians, earlier this week. “While the Interior Department claims to be taking action for the climate, this report seems to confirm the administration’s only interest is in driving climate denial on behalf of the fossil fuel industry.”

Nichols pushed back against Interior Secretary Deb Haaland’s claims that the report’s recommendations would mitigate “worsening climate impacts,” declaring that “this is a lie.”

“Despite President Biden’s direction, the Interior Department’s report does absolutely nothing to confront the climate impacts of unchecked federal oil and gas extraction,” he said. “At best, it’s outright climate denial. At worst, it’s deliberately deceptive, and nothing more than a shill for the fossil fuel industry’s bottom line. Either way, the Interior Department is failing the climate and failing Americans.”