“Unless we receive substantial new funding immediately, mass starvation and famine will follow,” said the U.N. food program chief of the crisis in Yemen. 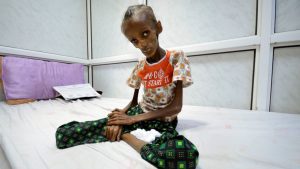 Warnings from the Food and Agriculture Organization, the World Food Program (WFP), and UNICEF came in response to the just-released Integrated Phase Classification (IPC) analysis on Yemen, which lays primary blame for the food crisis on the ongoing conflict.

The IPC is a collaborative initiative that tracks the severity and magnitude of acute and chronic food insecurity in hotspots across the globe.

“The resounding takeaway” from the new report, said U.N. resident and humanitarian coordinator for Yemen David Gressly, “is that we need to act now.”

The IPC analysis expresses particular concern that 31,000 people in the country are currently facing extreme hunger levels—what it classifies as a phase 5 catastrophe—and that the figure is projected to rise to 161,000 over the second half of the year.

The report also categorized 17.4 million people in Yemen in at least a phase 3 “serious” acute malnutrition stage and in need of assistance. The number is expected to increase to a record 19 million starting in June.

There are also 2.2 million children acutely malnourished—538,000 of whom are severely malnourished. Further troubling is that 1.3 million pregnant and lactating women are also suffering from acute malnutrition.

“More and more children are going to bed hungry in Yemen,” UNICEF executive director Catherine Russell said a statement. “This puts them at increased risk of physical and cognitive impairment, and even death.”

“The plight of children in Yemen can no longer be overlooked,” she said. “Lives are at stake.”

The new figures come amid Russia’s ongoing invasion of Ukraine, which has forced 2.5 million Ukrainians to flee and triggered a food and fuel crisis.

Yemen is heavily dependent upon food imports, and it imports roughly 30% of its wheat from Ukraine, according to the U.N.

In a statement earlier this month, WFP executive director David Beasley linked the Ukraine invasion with the catastrophe in Yemen, warning that “the bullets and bombs in Ukraine could take the global hunger crisis to levels beyond anything we’ve seen before.” He warned the war will impact global supply chains and the cost of food.

Just after Russia launched its invasion, Beasley expressed concern that malnourished Yemeni children have “been forgotten by the world.”

Just when you thought it could not get any worse: War in #Ukraine. This will have a dramatic impact on our ability to reach the 120M people we feed, inc. 8M in #Yemen who ALREADY get just half rations.

Reacting Wednesday to the IPC report, Beasley said, “These harrowing figures confirm that we are on a countdown to catastrophe in Yemen and we are almost out of time to avoid it.”

“Unless we receive substantial new funding immediately, mass starvation and famine will follow,” he said. “But if we act now, there is still a chance to avert imminent disaster and save millions.”