“This is one of the scariest reports I have ever seen,” said one climate scientist in response to new study. 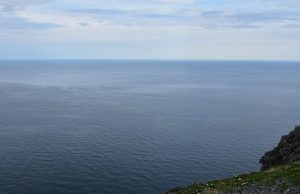 The Barents Sea is an area of the Arctic Ocean, located in the north of Norway and Russia. Named after the Dutch navigator Willem Barents. Photo: Richard Mortel/flickr/CC

New scientific research published Wednesday shows the waters in the North Barents Sea are warming at a rate that is much more rapid than most climate models have predicted, with worrying implications about feedback loops for the larger Arctic region and far beyond.

Extending between the north coast of Norway and Russia in the eastern Arctic Ocean, the North Barents Sea has been warming at a rate nearly seven times that of the global average, the study shows. The researchers used temperature data over four decades to determine that the trends in the region—the “fastest warming place known on Earth“—should be seen as an “early warning” of what could happen elsewhere.

Published in Scientific Reports, the new findings offer further confirmation that feedback loops in the Arctic are taking hold but could be doing so at a faster rate than previously understood.

“The warming pattern is primarily consistent with reductions in sea ice cover and confirms the general spatial and temporal patterns represented by reanalyses,” states the abstract of the study. “However, our findings suggest even a stronger rate of warming and [sea ice concentration (SIC) and sea surface temperature (SST)] relation than was known in this region until now.”

Researchers behind the study, reports High North News, warn the increased warming is likely to fuel “increases in extreme weather in North America, Europe and Asia.” The scientists say the Barents sea region offers a window into how warming is already impacting the Arctic more broadly and what more rapid warming could look like elsewhere in the future.

“We expected to see strong warming, but not on the scale we found,” Ketil Isaksen, a senior researcher at the Norwegian Meteorological Institute who led the study, told the Guardian. “We were all surprised. From what we know from all other observation points on the globe, these are the highest warming rates we have observed so far.”

“The broader message is that the feedback of melting sea ice is even higher than previously shown,” he said. “This is an early warning for what’s happening in the rest of the Arctic if this melting continues, and what is most likely to happen in the next decades.”

Bill Mcguire, emeritus professor of geophysical and climate hazards at University of College London, said the findings were among the most dire he’s ever seen.

This is one of the scariest reports I have ever seen

Heating up to 2.7C a decade in parts of the #Arctic

While land-surface temperatures are rising and oceans warming across the globe, Isaksen said his team’s research helps show that “what’s happening in the far north is off the scale.”

It was already known that the climate crisis was driving heating across the Arctic three times faster than the global average, but the new research shows the situation is even more extreme in places.

Sea ice is good at reflecting sunlight but is melting away. This allows the darker ocean below to absorb more energy. Losing sea ice also means it no longer restricts the ability of warmer sea waters to heat up the Arctic air. The more ice is lost, the more heat accumulates, forming a feedback loop.

According to Dr. Ruth Mottram, a climate scientist at the Danish Meteorological Institute who was not part of the research team, “This study shows that even the best possible models have been underestimating the rate of warming in the Barents Sea.”

“We seem to be seeing it shifting to a new regime, as it becomes less like the Arctic and more like the North Atlantic,” she told the Guardian. “It’s really on the edge right now and it seems unlikely that sea ice will persist in this region for much longer.”