If the generators run out of fuel, “they will stop, and after that there will be a disaster,” said a Ukrainian nuclear expert. “There will be a melting of the active core and a release of radioactivity from there.” 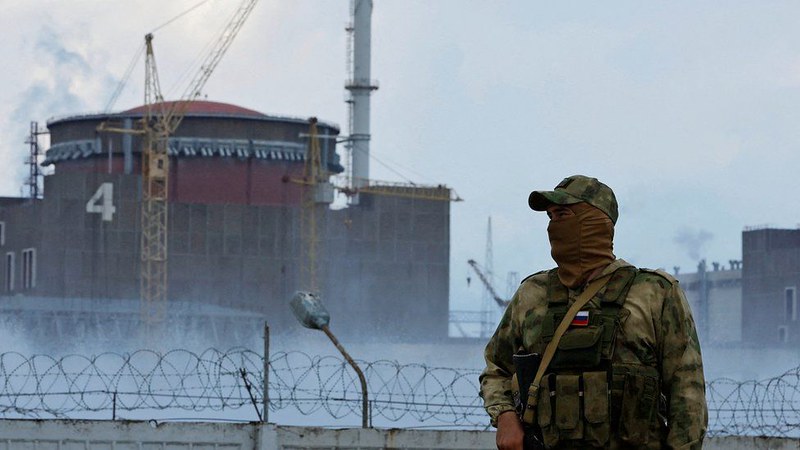 A worker at the Zaporizhzhia nuclear power plant in August 2022. Photo: Just Click’s With A Camera/flickr/CC

The Russian-occupied Zaporizhzhia Nuclear Power Plant in southeastern Ukraine has been forced to switch to emergency diesel generators after overnight shelling disconnected the facility from the electric grid, Ukraine’s state-run nuclear operator and the United Nation’s atomic watchdog said Saturday.

If the generators run out of fuel, “they will stop, and after that there will be a disaster,” Petro Kotin, the head of Ukraine’s public nuclear enterprise Energoatom, told BBC World News. “There will be a melting of the active core and a release of radioactivity from there.

Warning that diesel supplies at Europe’s largest nuclear power plant are limited, Kotin said that “right now we are working on logistics to supply more fuel for these generators.”

Although all six nuclear reactors at the Zaporizhzhia plant have been shut down as of last month, they still require a constant supply of electricity to keep spent nuclear fuel rods cool and prevent a catastrophic meltdown of the kind that occurred 36 years ago at Chernobyl, some 400 miles away.

The International Atomic Energy Agency (IAEA), which left a pair of independent observers at the facility last month following a weeklong site visit, confirmed that “the plant had switched to its diesel generators after shelling at around 1 a.m. cut the main 750 kilovolt line supplying external power to the plant,” Reuters reported.

IAEA Director-General Rafael Mariano Grossi said in a statement that “the resumption of shelling, hitting the plant’s sole source of external power, is tremendously irresponsible.”

“The Zaporizhzhia Nuclear Power Plant must be protected,” said Grossi, who added that he will “soon travel to the Russian Federation, and then return to Ukraine, to agree on a nuclear safety and security protection zone around the plant.”

“This is an absolute and urgent imperative,” the leader of the Vienna-based atomic watchdog stressed.

At the conclusion of his team’s fact-finding mission last month, Grossi warned that “something very, very catastrophic could take place” if shelling persists at the Zaporizhzhia plant. “We are playing with fire,” the IAEA chief said as he referenced the agency’s latest report on the “seven indispensable pillars for ensuring nuclear safety and security in Ukraine.”

As the U.N. summarized:

The report proposes setting up a nuclear safety and security protection zone that would be limited to the perimeter and the plant itself.

Other recommendations call for removing all military vehicles and equipment from nuclear buildings at the site and ensuring the return to clear and routine responsibilities for staff, in addition to re-establishing an “appropriate” work environment.

U.N. Secretary-General António Guterres endorsed the recommendations outlined in the IAEA report, reiterating his call for Russian and Ukrainian forces to cease fighting near the Zaporizhzhia nuclear facility and for both countries to agree to a demilitarized perimeter around the site.

Each nation has accused the other of being responsible for shelling the site in recent weeks. Experts have repeatedly sounded the alarm about the growing risk of a far-reaching disaster, noting that the Zaporizhzhia plant contains more radioactive waste than was present at Chernobyl when it exploded.

Radioactive contamination from that 1986 nuclear accident in what is now Ukraine rendered an area of more than 1,000 square miles uninhabitable and caused the illnesses and deaths of potentially hundreds of thousands of people.

“Any damage, whether intentional or not, to Europe’s largest nuclear power plant in Zaporizhzhia—or to any other nuclear facility in Ukraine—could spell catastrophe, not only for the immediate vicinity, but for the region and beyond,” Guterres said last month. “All steps must be taken to avoid such a scenario.”

Just two weeks after the U.N. chief’s remarks, a missile hit within 1,000 feet of another Ukrainian nuclear plant held by Russia, heightening fears that the ongoing war could lead to a massive environmental and public health calamity.

Zaporizhzhia is one of four Ukrainian regions that Russian President Vladimir Putin recently annexed in violation of international law.

“While the nuclear plant has been under Russian control for months, the city of the same name remains under Ukrainian control,” The Associated Press reported Saturday. “Putin signed a decree Wednesday declaring that Russia was taking over the plant. Ukraine’s Foreign Ministry called it a criminal act and said it considered Putin’s decree ‘null and void.’ Ukraine’s state nuclear operator, Energoatom, said it would continue to operate the plant.”

Referring to the Zaporizhzhia nuclear facility, the IAEA said that “16 of the plant’s diesel generators started operating automatically, providing its six reactors with power. After the situation stabilized, 10 of the generators were switched off, leaving six to provide the reactors with necessary electricity.”

“All the plant’s safety systems continue to receive power and are operating normally,” the IAEA said, citing what Ukrainian nuclear technicians told the agency’s experts stationed at the facility. “The plant’s diesel generators each have sufficient fuel for at least 10 days. ZNPP engineers have begun work to repair the damaged 750 kV power line.”