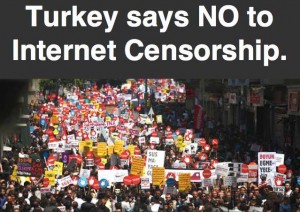 In response to leaks of possible corruption in Recep Tayyit Erdogan’s regime, the Prime Minister of Turkey has banned Twitter. In a speech on March 20, he stated the social media network is “immoral” and the “protection measure” was needed to prevent civilians from being harmed from its influences.

He also has threatened to shut down access to Facebook and YouTube, among other social media sites that remain outside of the control of the Turkish government system. Erdogan’s government already controls all media and broadcasting within the country. Turkey also has imprisoned 61 journalists within its borders, all of whom wrote independent articles, departing from the state approved news allowed to be published.

It all started a few weeks ago when tweets started circling that reportedly were phone conversations and videos of Erdogan planning corrupt acts to secure both his upcoming election and his financial affairs through taking of public money. The leaks enraged Erdogan and brought about a heavy handed reaction from the government. Turkish president, Abdullah Gul had dismissed the threats of banning internet, Facebook, YouTube and Twitter.

Erdogan blames supporters of Fethullah Gülen of infiltrating police and the judiciary and of engaging in “espionage,” saying that the group even listened in on his encrypted telephone lines. The Gülen movement denies involvement, reports The Guardian. “The disruption sparked a virtual uproar with many comparing Turkey to Iran and North Korea, where social media platforms are tightly controlled. There were also calls to take to the street to protest, although some users equally called for calm, the report said.

Taking a play from Putin’s book of “blame the west for everything,” Erdogan stated “The international community can say this, can say that. I don’t care at all. Everyone will see how powerful the Republic of Turkey is.”

Ironically, he sent the message of closing down the social network via Twitter.

In response, the good people of Turkey quickly compensated for the loss by using #TwitterisblockedinTurkey texts from cell phones to get the word out. The message went viral and quickly moved among the top trending globally. Tweeting has actually risen in the country by 138% since the ban was enacted.

THAT is how powerful the citizens of Turkey are.

Let us hope they remember their power on election day.

Further reading on issues related:
Erdoğan Running Amok: Turkey and the Politics of Polarization by Umut Özkırımlı, Professor of Contemporary Turkey Studies at the Center for Middle Eastern Studies, Lund University, published March 21, 2014 in The World Report, a partnership of The Huffington Post and Bergguen Institute on Governance