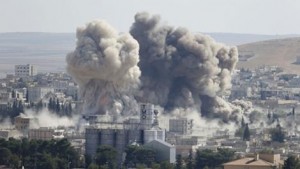 Coalition forces bomb from above while Kurdish fighters defend the town of Kobane. Image via Facebook.

While we continue to watch the most valiant warriors defend the town of Kobane on the Syrian border with Turkey while the rest of the world hears Erdogan proclaim that Kobane will fall. There are those who are doing all they can, such as a group of researchers, scholars and academia associates have taken action to call for immediate intervention.

The Kurdish Studies Network is a group of over 1,000 members who research and study the issues, ideas and history that surround the Kurdish people, their continued struggle for autonomy and nationalism and the impacts of the diaspora on the Kurds.

As is often the case, scholarly people seldom speak out regarding current events and world affairs. When they choose to do so, one must recognize the importance of the message as well as the urgency which brought the action. Here is their statement on Kobane (Kobani in Kurdish):

The humanitarian crisis caused by the Islamic State (IS) continues to terrorize and displace hundreds of thousands of people in the Middle East. The autonomous canton of Kobani is now bearing the brunt of the IS’s attacks as the international community has mostly been passive. The city has been under siege for three weeks. Despite fierce resistance by the defenders of the town, the advance of the IS forces towards Kobani is threatening to set off another massacre similar to that of Shengal. As scholars working on issues related to the Kurds and other peoples of Kurdistan, we are profoundly concerned about yet another imminent humanitarian crisis and stand in solidarity with the people of Kobani. We urgently call on the coalition forces against the IS and the broader international community to take immediate action to prevent an impending disaster by supporting the Kurds in their fight for self-defense.

We view the situation in Kobani as one of self-defense against the military aggression of the IS, notorious for its macabre forms of violence against ethnic and religious minorities. The defenders of the city of Kobani have repeatedly and desperately tried to bring their predicament to the attention of the world community and called for more focused and effective air strikes against IS targets around Kobani in coordination with the political authorities and resistance fighters of Rojava (Western Kurdistan). They are once again asking for diplomatic and political recognition, weapons of self-defense, and humanitarian aid to protect themselves against the relentless onslaught of IS. They are too ill-equipped to be able to fend off the most advanced American and Russian arsenals used by the IS. If global support is not provided immediately, they may not be able to withstand the IS’s incessant bombardments; tomorrow may be too late.

We fully support Kobani’s demands and spirit of self-defense and call on the international coalition forces and the broader international community to support Kobani immediately. In expressing our solidarity, we need to stress the fact this statement is not a call for any military aggression or occupation, including that of the Turkish military. We encourage the Turkish government to negotiate with the Kurdish representatives in good faith to ensure the ongoing peace process, which holds much promise. As Kurdish political representatives of Rojava have repeatedly declared, if they are recognized as a legitimate authority and provided with the needed weaponry and other support, they are capable of driving away the threat of the IS.

Ultimately our appeal for extending the necessary support to Kobani has as much to do with the survival of a pluralistic city and its residents, as it has to do with the defense of freedom everywhere else.

Kurdish Studies Network began their statement with 299 signatories and they now invite all academia people throughout the world to endorse their statement by signing a petition on Change.org. You can add your name to the petition here:
https://www.change.org/p/international-community-scholars-statement-of-solidarity-and-call-for-action-to-support-kobani

This is not the first time this group has taken action. Most recently, they were instrumental in bringing international attention to the Kurdish prisoners held in Turkey’s prison system, who began a hunger strike as a last resort to call attention to their plight.

Prisoners will begin to die soon. Every second is valuable.

We, the undersigned, are deeply concerned about the situation and condition of hunger strikers in Turkish prisons. We understand that over 700 Kurdish political prisoners have passed their 46th day on hunger strike, without their demands being addressed by the authorities. Medical experts confirm that in the course of a hunger strike the 40th day is a turning point where physical and mental dysfunctions commence, as well as cases of death begin to occur.

According to international conventions signed by the Republic of Turkey, the government is in charge of a prisoner’s health. As top-ranking members of the government, the President, Prime Minister and the Minister of Justice will personally be held responsible for any damage to the prisoners’ physical condition.

Furthermore, the prisoners’ demands consist primarily of the right to defense in mother tongue and freeing Abdullah Öcalan from solitary confinement. We would like to express our full support of these demands since they are based on fundamental human rights.

We therefore urge the Turkish government to enter in constructive dialogue with the prisoners to respond to their demands.

The international community’s opinion on Turkey and its reform process will be strongly shaped by the way the present hunger strikes are handled and the prisoners are treated. Turkey’s reputation might be seriously harmed should this incident turn into a human tragedy.

Occupy World Writes stands in Solidarity with Kurdish Studies Network’s statement, all those who choose to sign it, and all those known and unknown people who are doing whatever they possibly can to help this crisis.

THE WHOLE WORLD IS WATCHING.