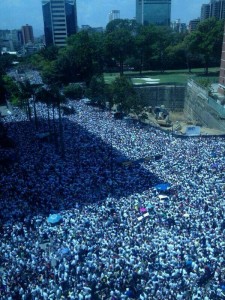 On February 18, in “Venezuela: Playing the Blame Game,” we talked about the protests taking place in Venezuela’s capitol, with concern of demonstrations spreading. Today, Al Jazeera reports “Venezuelan security forces and demonstrators have faced off in streets blocked by burning barricades in several cities in an escalation of protests against President Nicolas Maduro’s socialist government.”

Opposition leader Lopez surrendered himself to the authorities in a dramatic show with cheering crowds of thousands of supporters witnessing the event. Held on charges that include arson and criminal incitement stemming from a massive February 12 rally, a judge ruled today there is evidence to hold him. Lopez, a 42-year-old Harvard-educated economist, could face up to 10 years in prison.

Maduro, refusing to compromise or negotiate with the protestors, says that Lopez is in league with the US government and they would like to see a coup in the country. 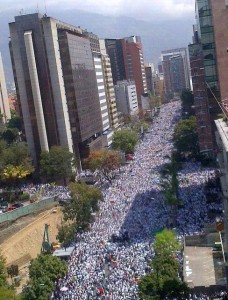 Journalists have been arrested, beaten and tortured, and their equipment destroyed. The government now controls all broadcasting within Venezuela. “It’s important we have foreign media here. Our media is censored; we learn about our own country from outside sources,” a student at an opposition rally, Gauber Venot said.

At least six people have died since the unrest turned violent last week, with scores of injuries and arrests.

Occupy World Writes reaffirms our steadfast commitment of solidarity with all people who exercise peaceful assembly to protest grievances against their governments who have failed to address their most basic of needs.