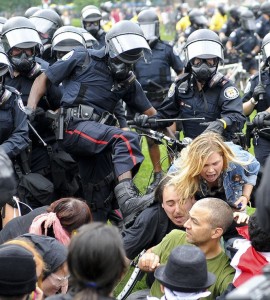 If there is any city that has perfected the International Day Against Police Brutality, it would be Montreal, Canada. Since 1997, the annual event has resulted in mass arrest.

What began as an initiative of the Montreal based Collective Opposed to Police Brutality and the Black Flag group in Switzerland has become a celebration in and of itself. Last year’s event resulted in more than 200 people being detained and given $637 in fines (each) for violating municipal bylaws and 12 others were arrested for criminal acts. The first arrest was made before the march even began.

Montreal police use the same tactics as any other militarized police force; cordoning, kettling, tear gas, water cannons, shield pushing, wedging and baton attacks, to name only a few. They also open the event up to surrounding police forces to come for training and support. In 2013, they added a high-tech command center to their arsenal to help their efforts.

Their efforts have paid off. Montreal now attracts people from across the country that take part. Students are not the only participants, and some come to view the events from a tourist perspective, watching from hotel windows as events unfold in the streets below them.

The event has spread to other cities in Canada as well as world-wide. In the United States, the focus is on October 22 (O22), known as National Anti Police Brutality Day. 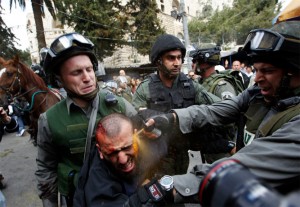 While Montreal and other cities experiences their marches, rallies and arrests, let us be reminded of what this day represents. Perhaps you remember the scene from UC Davis, of seated students being pepper sprayed by an officer (who ended up being awarded $38,000 by the courts for HIS emotional duress); Oakland Occupy encampment brutalities; state troopers who pull over women and rape them; SWAT teams breaking into homes and shooting to kill – only to discover they have the wrong address; numerous examples from America exist.

This is nothing when compared to experiences in other countries. Police are supposed to protect the people. What they actually do is protect the state and the property of the corporations and top income holders. They prevent people from exercising their rights to assembly, rights to language and cultural heritages, rights to redress their grievances to their governments, and rights to be treated with respect, dignity and humanity.