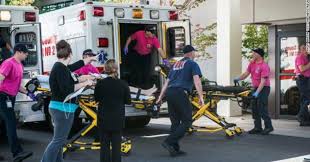 Thirteen people were shot dead, and 20 are wounded, after a shooting on October 1 at a community college in Roseburg, Oregon. Image via Common Dreams.

These startling statistics are driven home with each new mass shooting (though the most recent tragedy in San Bernardino, California is a bit unusual in that a married couple were the shooters).

In any event, politicians and the media are trotting out the usual suspects to explain the tragedy, whether it’s the lack of attention paid to mental illness or the easy availability of guns.

But these explanations dance around the big questions: why is there always a man behind these shootings? And why is it almost always a young man?

Evolutionary psychology can provide some clues.

Psychologists Joseph Vandello and Jennifer Bosson have coined the term “precarious manhood” to describe a dilemma that only men seem to face.

In a nutshell, they argue that “manhood” – however an individual male’s culture might define it – is a status that must be continually earned. And one’s self-worth is tied to being perceived as a “real man.”

It’s precarious because it can be easily lost – especially if the man fails to measure up to the relentless challenges that life throws at him, be they tests of physical bravery, or competition with other men for respect and status.

When I introduce this concept to my male students, they instantly recognize what I’m talking about. But when I ask the women if there’s a female equivalent, I’m often met with confused looks. (Some do note that the inability to have a child could be a threat to womanhood.) Indeed, it quickly becomes clear in the ensuing discussion that “manhood” is more precarious than “womanhood.”

The roots of this male dilemma reside deep in our prehistoric past. Throughout the animal kingdom, the sex that invests the least in the reproduction of offspring (almost always males) competes among themselves for sexual access to mates.

Historically, powerful men have always enjoyed greater sexual access to women than than men lower in the pecking order, and violence can often be traced to this grim struggle for status. Anthropologist Napoleon Chagnon spent years studying the Yanomamo people of South America. He discovered that men who had killed other men acquired significantly more wives than men who hadn’t killed anyone. And by all indications, a man’s status in the group was often dependent upon how believable his threats of physical violence were.

In different cultures, the male “quest for dominance” may play out in different ways. Regardless, it is clearly a universal motivating principle among males, with the achievement of dominance satisfying and rewarding for those who attain it. As scholar Jonathan Gottschall put it:

To physically dominate another man is intoxicating.

And so, violence committed against the right people at the right time became a ticket to social success.

In early human societies, competitive success or failure in early adulthood determined a man’s standing in a social group for the rest of his life. It wasn’t possible to simply hit the “reset” button and join another group, so what happened during the teen years mattered a lot.

For this reason, high-risk competition between young males provided an opportunity for “showing off” the abilities needed to acquire resources, exhibit strength and meet any challenges to one’s status. Consequently, heroic or even recklessly daredevil behavior was rewarded with status and respect – assuming, of course, that the young man survived the ordeal.

Today, the widespread promotion of sport in our culture undoubtedly developed as a constructive alternative for dealing with the proclivities of young males that evolved in a very different time. In a legally sanctioned gladiatorial arena, young men are able to exhibit the same skills – throwing, clubbing, running, wrestling, tackling, hand-eye coordination – that would have made them successful fighters or hunters in the ancestral environment.

In fact, the tendency of young men to engage in risky, aggressive behavior prompted the Canadian psychologists Margo Wilson and Martin Daly to give it a name: Young Male Syndrome.
The duo studied the relationship among age, sex and homicide victimization in the United States in 1975. They found that the likelihood of a woman being a murder victim doesn’t change dramatically throughout the course of her life. The pattern for the males, on the other hand, is striking. At age 10, males and females have an equal probability of being murdered. But by the time men are into their 20’s, they become six times more likely to be murdered.

Consistent with Wilson and Daly’s data, 87% of the 598 homicide victims in the city of Chicago in 2003 were males, and 64% of the victims were between the ages of 17 and 30. The likelihood of being the victim of lethal violence peaks for men between the late teens and late 20’s, before steadily declining for the rest of their lives.

Nature fuels the fires of male violence by equipping young men with the high levels of testosterone necessary to get the job done.

Researchers such as myself who study the relationship between testosterone and aggression in humans have concluded that testosterone-fueled violence is more likely to occur when males are competing with other males, or when the social status of a male is challenged in some way. The increased testosterone facilitates whatever competitive behaviors are needed to meet the challenge, which could mean physical violence.

Many studies have shown that testosterone levels in males rise and fall according to whether the individual wins or loses in competitive sports, like tennis and wrestling – even chess.

Sports fans experience the same spike watching sports, which helps explain the violence and destructive rioting that can take place after big games (win or lose).

Adding guns to the mix

So how do guns figure into this violent equation?

In 2006 I coauthored a laboratory study on men’s responses to guns in the journal Psychological Science with my colleague Tim Kasser and one of our students. We demonstrated that males who interacted with a handgun showed a greater increase in testosterone levels and more aggressive behavior than males who interacted with the board game Mouse Trap.

In the study, each participant dismantled either a gun or the mousetrap, handled its components and then wrote instructions for how to assemble the objects. Then we gave them the opportunity to put hot sauce into water that was going to be consumed by another person. The participants who handled the gun put in significantly more hot sauce – and were also more likely to express disappointment after learning that no one was going to actually drink the concoction.

“After I picked up the handgun,” he explained, “I brought it back to my room and felt a new sense of power. Who’s the alpha male now, bitches?”

Young male violence is most likely to be initiated by young men who don’t command respect from others. They’ll often feel like slighted outcasts, deprived of what they want or feel they deserve.

British clinical psychologist Paul Gilbert has developed something he calls the Social Attention Holding Theory. According to Gilbert, we compete with each other to have other people pay attention to us; when other people take notice, we build status. The increased status that comes from having others attend to us leads to all kinds of positive emotions. But persistently being ignored by others produces much darker emotions – especially envy and anger.

It’s no mystery why the media will often describe mass shooters and terrorists as misfits or loners. In many cases, they are.

Nicolas Henin was a Frenchman who was held hostage by ISIS for ten months. Here’s how he described his young, murderous, Jihadi captors:

They present themselves to the public as superheroes, but away from the camera are a bit pathetic in many ways: street kids drunk on ideology and power. In France we have a saying – stupid and evil. I found them more stupid than evil. That is not to understate the murderous potential of stupidity.

Apparently, a lack of attention from others results in a lack of status, resulting in a lack of access to women. Combined with a young man’s testosterone, it creates a toxic, combustible mix.

There may not be much we can do to change the structure of the young male mind that evolved over the course of millions of years. However, ignoring or denying its existence doesn’t do us any favors.

Before the details of the last mass shooting in San Bernardino were even known, Speaker of the House Raul Ryan spoke about how gun violence in America is a result of mental illness, and stated that the proposed “Murphy’s Law” would make America safer.

Until Congress lifts the ban for doing studies on gun violence in this country, we are only throwing darts at a wall while blindfolded.

The law would take away all privacy safeguards for anyone with mental illness. It then will force incarceration (called “institutionalization” in the bill) and will force this person into a drug regimen that may or may not be the correct course of treatment.

First, the law will serve as a deterrent for anyone thinking of seeking help for mental illness.

Second, the law will focus on disabled people such as returning veterans, violence survivors and others with PTSD and panic disorders.

Thirdly, and worst of all, the law clearly discriminates against a specific segment of the population based on what they might do, completely ignoring any oath of office to protect and uphold the Constitution of this nation.

There is a reason this is dubbed “Murphy’s Law” and we think it is more than coincidental.