On Wednesday, January 22, world leaders will convene for peace talks known as “Geneva II” and whose primary goal is to find a way to deal with “the problem of Syria.” Syria has been embroiled in civil war and absolute destruction in the wake of unrest throughout the region. 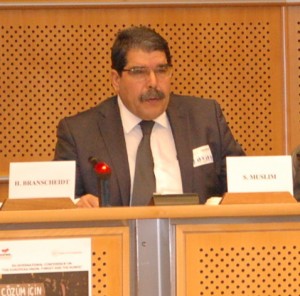 It appears the invitation list reads as a “Who’s Who” among the world’s leaders. Yet, somehow, absent from that list is the most crucial voice that could help open the door for the peaceful resolution sought that would be best for all parties involved, most specifically that of the Kurdish Syrians and their neighbors. A “Missing Invitation” should be extended on an emergency basis to include Saleh Muslim, leader of the Democratic Union Party, an alleged Syrian affiliate of the Kurdistan Worker’s Party, and the most powerful member of the Kurdish opposition in the Syrian civil war.

In a recent article appearing in Armenian Weekly, International correspondent and recognized expert in reporting on Kurdish issues, Amberin Zaman, observes, among other reasons, “why Turkey and the United States say they won’t engage with Mr. Muslim and the PYD is because the latter has refused to join the Istanbul-based Syrian opposition and to take up arms against the Assad regime. Turkey’s foreign minister, Ahmet Davutoglu, made it clear that this is why Ankara has frozen dialogue with Mr. Muslim.”

If the Geneva II talks are to be successful both in intent and outcome, engaging Mr. Muslim would be the most logical means to achieve these goals. How is it possible to fairly determine the fate of a people labeled as “adversaries” if they are not allowed to participate in the discussion, but are expected to acquiesce to the outcome of policies decided upon? Why would those who refused to take up arms not be allowed to further discuss peace? Why would a people who have been victims of genocide and systematic cultural and practical extinction for the last 90+ YEARS not want to seek a means to an end? To exclude the Kurdish voice is allowing the policies of assimilation for governments who will only perpetuate the cycle which has proven to be unsustainable to peace. The PKK is a symptom of these policies.

In the interest and integrity of the Geneva II talks, we recommend that Saleh Muslim be included.

Editorial Comment: As I began covering Syria and broadened to the issues affecting the Kurdish people also in Turkey, Iraq and Iran, I have been willing to shed misconceptions and replace my ignorance for an appreciation of a peaceful, beautiful people whose story must be told. Begin with more information and further reading by visiting the American Kurdish Information Network. Be sure to watch the videos as well as read the information provided.