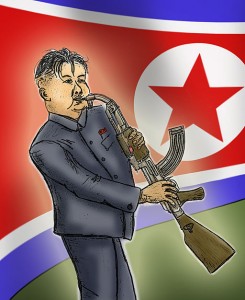 Today marks the anniversary of the founding of the Workers’ Party of Korea; the sole political party of the Democratic People’s Republic of Korea (DPRK), more commonly referred to as North Korea. But, there’s something different about this year; nobody outside the North Korean government knows where the leader of the country is.

Like an international game of “Where’s Waldo?” (with added nuclear content), Kim Jong-un’s whereabouts have been the subject of much speculation. The last time he was seen in public was September 3, which is the longest he’s disappeared from public view since taking control of North Korea in December of 2011. He failed to appear at a recent session of the Supreme People’s Assembly, and he failed to make his annual post-midnight visit today to the Pyongyang mausoleum where his father and grandfather are interred.

The official version says that he’s suffering from an unnamed “uncomfortable physical condition.” There’s been multiple stories about what that condition is: one source said: “I understand that he is suffering from gout along with hyperuricemia, hyperlipidemia, obesity, diabetes and high blood pressure,” and that a North Korean medical team had traveled to Germany and Switzerland to consult with colleagues about his health.

Another source told the Daily Telegraph that Kim had fractured his ankles by wearing shoes with Cuban heels during a long tour of military bases and factories. The stress this put on his feet and ankles combined with him being grossly overweight led to the ankle fractures.

Of course, there’s also those who say that Kim isn’t in power any more. One of the more common coup rumors had Kim being replaced by Vice Marshal Jo Myong-rok. The big problem with that is that Jo was reported to have died four years ago. Another (and more likely, we think) rumor has Kim’s younger sister Kim Yo Jong running the country in Kim’s absence, which would still have the power firmly in the Kim family’s hands, and would more than likely revert to Kim Jong-un when and if he reappears.

That being said, there have been unusual events recently regarding North Korea and the outside world. Last week, three high-ranking North Korean officials arrived in a surprise visit to South Korea. The head of this group was Hwang Pyong So, chief of the General Political Bureau of the army and vice chairman of the National Defense Commission; the highest ranking official to have ever visited South Korea. This week, North Korea’s deputy U.N. ambassador Ri Tong Il acknowledged the existence of labor camps in his country, and said that the secretary of the Workers’ Party had visited the E.U. for negotiations. These events have to be taken with a healthy amount of skepticism though, as North and South Korea were back to exchanging fire over a border incursion by a North Korean boat on Monday.

The bottom line – nobody seems to be really sure what’s going on in the DPRK. This worries us; besides being a rogue nuclear power and supporter of terrorist groups, the North Korean government’s a big player in the illegal drug and arms trade. The last thing the world needs is for there to be someone even more unbalanced than Kim Jong-un in control.