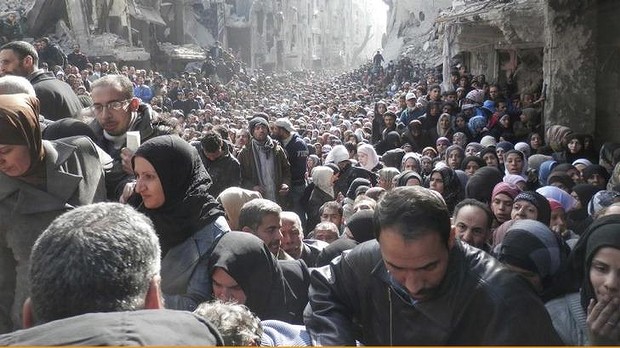 END_OF_DOCUMENT_TOKEN_TO_BE_REPLACED

This photograph, taken on January 31 and released by UNRWA on February 26, shows the grim reality for those trapped inside Damascus’ Yarmouk Refugee Camp. Photo courtesy United Nation News Centre via Facebook.

United Nations Relief and Works Agency (UNRWA) workers were met with the faces of deprivation, misery and despair when they were finally able to arrive at Yarmouk Refugee Camp just 5 miles from the center of Damascus recently. The camp had been under a month-long blockade by the Syrian government, claiming the food and supplies would benefit the opposition.

Forces loyal to Syria’s president killed at least 175 Islamist rebel fighters, most of them foreigners, in an ambush in insurgent-held eastern outskirts of Damascus, state media said on Wednesday, in a report from Eye Witness News in Beirut. The attack was carried out by Hezbollah forces, working with supporters of the Asaad regime.

In Raqqa, an extremist jihadist group has declared an open war on Christians, passing local laws requiring them to pay a tax in gold for their safety or face death.  In a report from BBC, revealing a statement from ISIS, additionally “Christians must not make renovations to churches, display crosses or other religious symbols outside churches, ring church bells or pray in public. Christians must not carry arms, and must follow other rules imposed by ISIS (also known as ISIL) on their daily lives. The statement said the group had met Christian representatives and offered them three choices – they could convert to Islam, accept ISIS’ conditions, or reject their control and risk being killed. “If they reject, they are subject to being legitimate targets, and nothing will remain between them and ISIS other than the sword,” the statement said.”

The now 3-year civil war has claimed over 140,000 lives and left hundreds of thousands homeless or fleeing. The struggle began in March 2011 with street demonstrations demanding democratic reform, but turned into an armed uprising after security forces used violence to quell the protesters. There are three distinct groups at war; the Assad regime which represents Iran, terrorist groups like al-Qaeda, and the Free Syrian Army, which is considered the only hope for a united and acceptable Syria. The triangulation of these forces has caught the people of Syria in the crossfire. 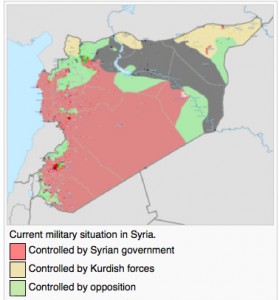 The Free Syrian Army (FSA), in simplistic terms, sprang up as a protection army at the beginning of the conflict. At first, the combination of various factions coming together resulted in some actions by FSA that were seen as possible war crimes. In August of 2012, the FSA announced that, in response to international concerns, FSA units would follow the Geneva Convention’s guidelines for the treatment of prisoners.

Occupy World Writes reaffirms our solidarity with the Syrian people, the Kurdish people throughout the world, and all those who seek democratic change. We support non-violent actions leading to change whenever possible, and we recognize self-protection and preservation as legitimate and acceptable means while rejecting assertive, aggressive acts of violence against anyone.