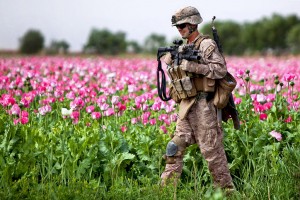 Lines for the polling places starting forming long before the polls opened on Saturday, election day in Afghanistan. Over 7 million of the 12 million eligible voters participated in what is the nation’s first transfer of power vote in the war-torn region. Women comprised about 35% of the traditionally predominantly male voters.

So what did it look like on Election Day? All 400,000 of Afghanistan’s police and soldiers were said to be on duty for the election. In Kabul, the nation’s capitol, traffic was prevented from entering the Afghan capital from midday on Friday, with police checkpoints erected at every junction. There was a good-natured, almost carnival atmosphere, with many people on the city streets.

Across the country, 10% of the voting stations were declared unsafe to open by the election commission.

The Taliban exerted great effort to disrupt the historic election. On Wednesday, a suicide bomber blew himself up at the entrance gate to the Interior Ministry in Kabul, killing six Afghan police officers. A day earlier, the Taliban killed a provincial council candidate and nine of his supporters. Last month, Sardar Ahmad, one of Afghanistan’s most prominent journalists, was among nine people killed in an attack in central Kabul. Less than two weeks earlier, Swedish Radio correspondent Nils Horner was shot dead in broad daylight on a Kabul street.

In the latest in a string of deadly attacks that marred the lead-up to the election, award-winning German photographer Anja Niedringhaus was killed and veteran Canadian reporter Kathy Gannon was injured when a police commander opened fire on their car in the eastern town of Khost on Friday.

The three front running candidates from a field of eight were all hopeful for the outcome, which will not be announced for several more days. Former foreign ministers Abdullah Abdullah and Zalmai Rassoul, (favoured by Hamid Karzai) and former Finance Minister Ashraf Ghani Ahmadzai were the favorites. Karzai can not seek re-election, according to the Afghanistan constitution.

As the United States and NATO forces prepare to leave Afghanistan, the people look forward to a future of their own choosing. Whoever emerges victorious must find a way to peace or lead the fight against the Taliban without the help of US-led combat troops, and also strengthen an economy that currently relies on declining aid money.

I had to wonder why the US was so intent on staying in a country that clearly wanted us to leave. And, based on our recent history in Iraq, I wasn’t confident that the war on terror was the only reason. Remember that the US wanted a permanent base in Afghanistan to help us keep an eye on the border of western China.

Then I ran across this article in Global Research, by Professor Michel Chossudovsky. In it, he writes, “In addition to its vast mineral and gas reserves, Afghanistan produces more than 90 percent of the World’s supply of opium which is used to produce grade 4 heroin. US military bases in Afghanistan are also intent upon protecting the multibillion narcotics trade.  Narcotics, at present, constitutes the centerpiece of Afghanistan’s export economy. The heroin trade, instated at the outset of the Soviet-Afghan war in 1979 and protected by the CIA, generates cash earnings in Western markets in excess of $200 billion dollars a year.”

Afghanistan also happens to sit on natural resources worth an estimated one trillion dollars, according to a second report by Chossudovsky.”The previously unknown deposits — including huge veins of iron, copper, cobalt, gold and critical industrial metals like lithium — are so big and include so many minerals that are essential to modern industry that Afghanistan could eventually be transformed into one of the most important mining centers in the world, the United States officials believe.”

Is it any wonder the Afghanis wanted us to leave?