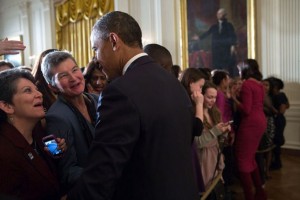 Barack and Michelle Obama greet guests following the Women’s History Month reception in the East Room of the White House on March 18, 2013.
By Pete Souza [Public domain], via Wikimedia Common

Patriarchal society has dominated human culture for centuries. With rare exception, men are seen as the providers of safety, economic income, the head of the family and the leaders of the community.

International communities recognize the absence of women in the most important discussions taking place today. The UN has questioned why more women are not involved in the peace processes. More women are now involved in parliaments and governments the world over. But it is still not representative of the populations being represented. In October, 2013, the United Nations Security Council and senior UN officials “issued a strong call on the international community to strengthen its commitment to ensuring that women play a more prominent role in conflict prevention, resolution and in post-war peacebuilding,” according to a UN News Centre article.

But I am becoming increasingly concerned when I see a country attempt to go back from over 50 years in progress toward women’s rights – and for the purpose of polarized politics in a reprehensible soup of despicable vitriol. And at the end of the day, the damage done is not to the women themselves, but to those who lose their credibility by sacrificing their morality in a verbal jihad resulting in sentiments that will linger long after the battles are seemingly over. 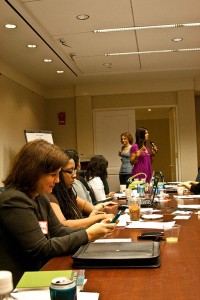 I never thought I would find myself defending Bridget Kelly until Chris Christie’s attorneys released their “document” that accused Kelly of being “emotional” and therefore causing the traffic problems in Ft. Lee, or their description of Dawn Zimmer as being “emotional” about her allegation of Christie’s office holding Sandy Aid money in exchange for support of a development project. It was done again when former CIA Director Michael Hayden called Dianne Feinstein “emotional” in her CIA investigation remarks. Lois Lerner was said to be “emotional” when she took the fifth during the IRS investigation. I could only think of the rape victims who were not allowed to testify at the trial of their rapist because their testimony would be too “emotional” and might sway the jury. In all these instances, “emotional” is meant to convey weakness, poor judgement, lack of knowledge and unprofessionalism.

It started a few years back, but we’ve watched the momentum increase. Since 2009, legislatures across the country have introduced new bills that repress women’s rights. While they may seem insignificant when viewed individually, collectively they represent a regression that appears to be orchestrated by men that feel threatened by women’s empowerment.

You look confused – let me explain. You already are familiar with the claw back of abortion access in America. We have also seen laws that attempt to redefine rape so fewer women can receive abortion when impregnated by their rapist. The IRS was almost forced to audit rape victims before this was struck from a pending bill due to public outrage. And let’s not forget the Michigan “rape Insurance” bill, requiring a pre-purchased policy that covers the “just in case” scenario, and then the state made the policy itself unavailable to women in the state. 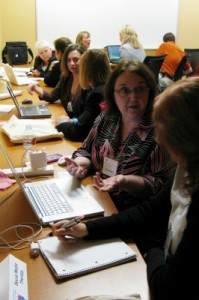 Washington committees review policies on women’s health, yet will not allow women to testify to these committees. They state myths as facts and claim facts are myths, and refuse to allow anyone to correct their misinformed ignorance. Medical science and facts be damned, these men know what’s best for womens health.

Some cities have passed rules that take domestic violence off the “calls we respond to” list for local police departments, citing budget cuts. Those cities report domestic violence being so high that the police spend “excessive” time dealing with the issue.

Voter ID laws make it especially difficult for women who have changed their name, either through marriage or divorce, to attain proper voting documentation. The restricted hours for voting target single working women.

Budget cuts in Washington have resulted in SNAP funds being slashed – hitting single mothers hardest. The response of “women need to get married as a means of improving their lives” mantra we are beginning to hear is not a policy or solution.

Pell grants, currently being threatened in Washington, benefit women overwhelmingly, offering a means to rise above their economic restrictions.

This week, we are hearing people argue that women don’t need or want equal pay for equal work. Yet women make on average, .77 for every $1.00 earned by a man doing the same work with the same qualifications.

All this takes place in the backdrop of men who were elected for their “family values” who then pass laws that they exempt themselves from regarding sexual harassment, get caught on camera in extra-marital affairs and worry about how men will be impacted if the Violence Against Women Act allows white rapists on Indian reservations to be prosecuted in court instead of falling through the legal loopholes. And now they are using the “negative impact” on men as an excuse to not pass the Equal Pay Act.

What is it called when you say one thing and do another?  H-Y-P-O-C-R-I-S-Y