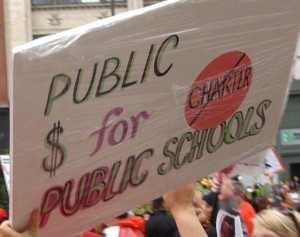 Everywhere, I see the signs. From people on the Texas State Board of Education trying to ban environmental science textbooks and trying to block textbooks that teach evolution to legislators in Arizona dumping Common Core standards because “some of the reading material is borderline pornographic.” and has “fuzzy math”, which substitutes letters for numbers; from the demonizing of teachers and their unions to the slashing of school budgets both on the state and Federal level – what we’re seeing instead of George W. Bush’s so-called “Race to the Top” is a “Race to the Bottom.”

In what seems to be a reoccuring theme when I take a look at what’s wrong in America today, this trend towards dumbing down the population began in policies enacted during the Reagan years. While he was governor of California, Reagan repeatedly called for ending free tuition for California residents in state colleges and universities (yes, California had that), annually demanding 20% cuts across the board for higher education, and repeatedly slashing funds for new school construction. He also slashed the budgets for public schools, forcing the communities to attempt to bridge the gap via tax increases. This was no more obvious than in LA, where the teachers walked out after massive underfunding due to five separate tax bills being voted down made them unable to do their jobs.

As President, it was more of the same. During his campaign, he called for the total elimination the US Department of Education, severe curtailment of bilingual education, and massive cutbacks in the Federal role in education. Under his watch, the education budget was cut in half; from 12% to 6%. And, that money went to the states instead of the individual school districts, leading to severe inequities. He also started the trend towards public funding of private, for profit schools, and wanted to bring prayer back into the classroom. His Secretary of Education (William Bennett) toured the nation making unprecedented and unprincipled attacks on most aspects of public education including teacher certification, teacher’s unions and the “multi-layered, self-perpetuating, bureaucracy of administrators that weighs down most school systems.” 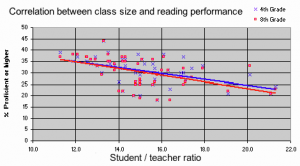 Then, we move forward to the present day. According to the Program for International Student Assessment (PISA), in 2012 American students fell to 29th place from 24th place in math, 22nd from 19th in science, and to 20th from 10th in reading among 65 global education systems over the previous three years. The OECD (Organization for Economic Cooperation and Development), who are responsible for PISA, noted that over the last decade, “there has been no significant change [in the United States] in these performances over time.” In other words, we aren’t progressing, but the rest of the world is.

This really shouldn’t surprise us too much. After all, in our country, one in four believe the sun goes around the earth. Furthermore, almost half don’t realize that antibiotics aren’t effective against viruses, and half don’t believe in evolution. And then, there’s the conspiracies. According to a PPP poll from last year, 37% of Americans believe global warming is a hoax, and 15% say the government or the media adds mind-controlling technology to TV broadcast signals, just to name a couple.

However, the education system doesn’t shoulder all the blame for this (even though it plays a big part). The other big factor is what you’re using right now to read this; the internet. Take any crazy position, and you’ll find a group of people who will reinforce that belief somewhere on the weird and wacky web. But, when you ask students from Harvard (one of the best schools in the country) what the capital of Canada is, and the only person who can answer comes from there, we have a serious problem.

If brain-eating zombies were to come to America, they’d starve to death…