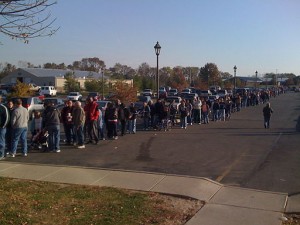 Ever since the Supreme Court struck down Section 4 of the Voting Rights Act of 1965 last year, we’ve seen a rash of new voter ID laws and voting restrictions in the states where Federal approval for any changes were previously required. Targeted mostly at minorities and students, the new laws will also disenfranchise or put undue hardship on many elderly voters.

While I could rant about the cowardice of such laws (if you have winning policies, there’s no reason to suppress the vote), I would like to propose a solution; one that would not only address the voter registration issue, but would also provide infrastructure jobs, enhance our educational system AND transform government at the same time. Do I have your interest yet?

The solution is simple, and starts with expanding high speed internet services to all of the U.S. The National Broadband Plan is a good start, but we can do better than this. High speed internet and the equipment to access it is a requirement for so many things these days that it only makes sense to provide every family with the tools needed. The required infrastructure upgrades would create jobs, and having high speed access at home even in the poorest and/or most remote areas would help those going to school immensely.

And, it wouldn’t be that expensive. Syed Karim, the former head of product development for Chicago Public Radio, has proposed what he calls the Outernet; a network of mini satellites providing non-commercial content for free via WiFi. And, he has a venture capital company raising money for the project. And, last year Mark Zuckerburg announced the formation of a partnership with Samsung Electronics, Nokia, Qualcomm and others to make Internet access available to everyone on Earth. With hardwired broadband in our homes and workplaces, and WiFi everywhere else, everybody in the nation would be connected. 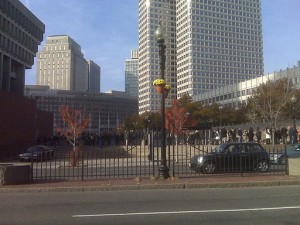 So, you’re thinking that this sounds all well and good, but what does this have to do with voting? The answer’s simple- online voting. Everybody would have a voter ID linked to a unique existing form- your Social Security number would be the obvious first choice. Security would be an obvious focus; either a multilevel password system or biometrics could be used here. And, before you start thinking 1984 with biometrics, remember that everybody’s fingerprinted at birth these days. Furthermore, biometric sensors are appearing more and more on our electronic devices; for example, my laptop has one, and the latest iPhones have unlocking via fingerprint.

We have our unique ID- now what? The next thing we do is redefine the role of Congress. Instead of the gridlock we see these days, Congress’s main job would be to write legislation that we the people would vote on. Yes, it would be more efficient to let Congress handle the details with some legislation, but for the most part, everything would be decided by us. Of course, the same thing could (and should) be implemented at the state and local level as well.

What would be the advantage to that? First of all, it would remove a lot of the influence that lobbyists have, as Congress wouldn’t have the power that it does now. Furthermore, it would lead to greater transparency. If we set a threshold – say 60% of eligible voters – for any bill to become law, the bills would have to be written in language plain enough for the average person to understand. And, it would promote civic responsibility and ownership in the general population, for they’d realize the only people to blame would be themselves in cases of gridlock or things not getting done. Because of this, the people would educate themselves on the issues- a win-win for all of us.

Will it be an easy transition? No. However, if we make a firm commitment to an overhaul along these lines, I could see it functional by 2020 or so. Then, we will finally have government by the people and for the people in this country.