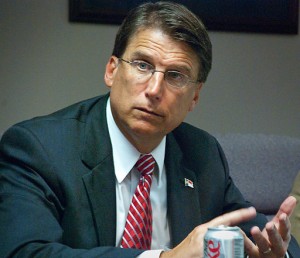 On May 22, the North Carolina Senate approved a bill that would lift the current moratorium on hydraulic fracturing (fracking) in the state and offshore by July of next year. The bill now goes to the House of Representatives, and if passed there, to Governor Pat McCrory.

Why is this news? Because the Senate bill also makes it a crime to disclose the chemicals used in fracking. Under the “Energy Modernization Act,” a state geologist would be the custodian of confidential information about fracking fluids. The information could be given to healthcare providers, local police and fire departments in case of an emergency.

Any other disclosure, and any disclosure by somebody other than the state geologist, would be a misdemeanor. It was originally going to be a mandatory felony charge, but the Senate reduced the penalty after objections from Democratic lawmakers in the North Carolina government, as well as national public outrage.

We have to wonder why North Carolina’s pushing fracking. There isn’t that much extractable gas in the state, and the natural gas industry’s showing little support for the bill. Why is the state pushing so hard to lift a ban on gas drilling before its Mining and Energy Commission even has a chance to draft and receive comment on the rules that would regulate fracking?

North Carolina has a horrible environmental record in the last few years; you only need to look at the Duke Energy/coal ash fiasco to be worried about how North Carolina will deal with the possible environmental impact of fracking. We’ve had evidence linking fracking to water pollution in at least four states. In McCrory, North Carolina has a governor who’s intervened in lawsuits against polluters, thus leaving them with minor slaps on the wrist and no real obligation to clean up their messes.

Once again, it seems that short term profits for a few trump the health and quality of life of the many. But, is there anything that can be done? In January, the EPA released requirements that companies fracking off the California coast must disclose the chemicals used as of March 1. This follows Governor Jerry Brown requiring companies fracking on land in California to disclose what chemicals they use.

Occupy World Writes calls for this to be the law nationwide. We hear all the time that drilling and the like are steps towards a brighter future. Without clean drinking water, we won’t have a future.