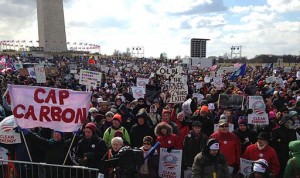 On January 22, TransCanada started shipping oil through the southern leg of the Keystone XL pipeline. That day, TransCanada CEO Russ Girling said in a conference call with reporters: “Showing people that this isn’t an export pipeline, that it can be operated safely, should provide the base underpinning and evidence that the Keystone XL is at the end of the day just another piece of energy infrastructure… It’s just a pipeline and it can be built and operated safely.” He also said that the pipeline was the safest ever built.

Three days ago, on May 28, it became known that the federal Pipeline and Hazardous Materials Safety Administration (PHMSA) had quietly added two additional regulations after finding out about potentially dangerous defects in the same southern leg that was touted as the safest pipeline ever built. The first requires TransCanada to hire a third party contractor hired by the PHMSA to monitor the construction of the pipeline and make reports to the safety administration on whether the work is sound. The second requires TransCanada to adopt a quality management program to ensure that the pipeline is “built to the highest standards by both Keystone personnel and its many contractors.”

Why the added regulations? In a letter to TransCanada from September 26, PHMSA said TransCanada had experienced a “high weld rejection rate,” with 72 percent of welds needing repair over the course of just one week. In another week, TransCanada had stopped welding work after 205 out of 425 welds required repairs. PHMSA also said that their inspectors had found that TransCanada wasn’t using approved welding procedures, and that the company had improperly tested the welders they hired – in other words, they weren’t qualified to do the job.

Another letter dated September 10 stated that inspectors discovered that parts of the pipeline had been laid without properly clearing rocks away from pipeline trenches. They also noticed that a corrosion-resistant coating had been damaged in numerous places by improper welding. This led to TransCanada digging up the pipeline in 97 different places to repair the coating. A November report found that TransCanada had dug up the pipeline 125 times to fix dents and sags. And, this is the safest pipeline ever built?

Over the last couple years, there’s been a groundswell of people across the globe raising awareness of the danger to climate and the environment from pipelines, fracking and the fossil fuel industry in general. On the other side, Big Oil and Big Coal have deep pockets and plenty of Congressthings to do their bidding and stop anything that might interfere with their profits.

Twenty years from now, 2014 will be seen as a defining point with how we deal with climate and the environment. It’s up to us to see that the good guys win; otherwise it’ll be known as the year we went past the point of no return.