Yesterday, an estimated 50,000 people marched through London in protest against austerity measures introduced by the coalition government. Held on the one year anniversary of the forming of the People’s Assembly, the march started from the BBC’s New Broadcasting House in central London, and ended in Westminister at the Houses of Parliament.

Among the people who spoke at the end of the march were Russell Brand, MP Caroline Lucas, journalist Owen Jones and comedian and commentator Mark Steel. Brand was his typically quotable self, saying:

“The people of this building [the House of Commons] generally speaking do not represent us, they represent their friends in big business. It’s time for us to take back our power. This will be a peaceful, effortless, joyful revolution and I’m very grateful to be involved in the People’s Assembly.”

“Power isn’t there, it is here, within us,” he added. “The revolution that’s required isn’t a revolution of radical ideas, but the implementation of ideas we already have.”

Clare Solomon, a spokesman for the People’s Assembly, stated: “It is essential for the welfare of millions of people that we stop austerity and halt this coalition government dead in its tracks before it does lasting damage to people’s lives and our public services.” 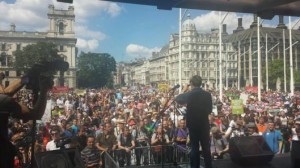 So, with this huge march starting at the BBC’s front door and going through the middle of London being obvious news, what did the BBC report about it? Absolutely nothing; it seems that they thought identifying a Scotsman at the World Cup who cheered Uruguay’s game winning goal against the British was more newsworthy.

The media by and large are not our friends. It’s owned by the same people who want to slash vital services and social programs for the 99% in the name of “fiscal responsibility”, while at the same time giving themselves massive tax breaks and subsidies that we end up paying for. It’s up to us to use social media, sites like this and word of mouth to spread the news that the media refuses to cover.

UPDATE: Evidently  the BBC did cover it; there was a three sentence story buried away in the London news.