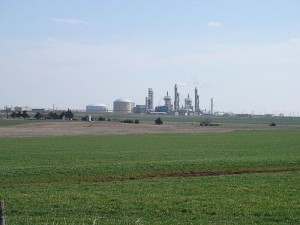 We’ve commented a number of times on the apparent link between wastewater injection wells (used to dispose of wastewater from fracking) and earthquakes. We’ve especially focused on Texas and Oklahoma as evidence of this link. A new study dealing with the increased tectonic activity in Oklahoma was published in the July 4 issue of Science, and the findings are even more conclusive.

Before 2008, the state averaged one quake a year with a magnitude greater than 3.0. However, this year alone has seen more than 230 such quakes; an increase of 22,900 percent. The study, co-authored by Katie Keranen of Cornell University and Geoffery Abers of Columbia University, explains how wastewater injection sites could be the factor driving the spike in seismic activity. “It really is unprecedented to have this many earthquakes over a broad region like this. Most big sequences of earthquakes that we see are either a main shock and a lot of aftershocks or it might be right at the middle of a volcano in a volcanic system or geothermal system. So you might see little swarms but nothing really this distributed and this persistent,” Abers explained to Nature.

The study analyzed four wastewater disposal wells in southeast Oklahoma City, that collectively inject four million barrels into the ground each month. The research showed that the fluids from the well were migrating along fault lines. Abers observes that:  “The important thing is that we are seeing earthquakes that are much more widely distributed, much farther from wells and in a lot of different directions. Some of these earthquakes are as much as 20 miles away from what seems to be the primary wells that are increasing the pressure.”

Oil industry leaders were quick to point out that the study doesn’t make a definite link between oil and gas drilling and earthquakes; mainly because the sub-surface pressure data that would confirm the relationship is mostly unavailable. And Mike Terry, president of the Oklahoma Independent Petroleum Association,, points out that disposal wells have been used in the state for more than half a century — sometimes exceeding current disposal rates. “Because crude oil and natural gas is produced in 70 of Oklahoma’s 77 counties, any seismic activity within the state is likely to occur near oil and natural gas activity,” he said. “We have also seen increased seismic activity in North America, including Idaho, Virginia, Arizona and northern Mexico, where dewatering projects and unconventional oil and gas development are nonexistent.”

However, Oklahoma isn’t the only state seeing a dramatic increase in small to medium sized quakes at the same time that fracking has increased in the area. Ohio, Arkansas, Kansas and of course, Texas, have all seen such increases as well. And, I wouldn’t call fracking “unconventional oil and gas development” these days either.

The industry leaders may claim there’s not a definite link – yet. But, when every new study reinforces the idea that fracking is indeed responsible for the spike in earthquakes in these areas, we think it’s only a matter of time.