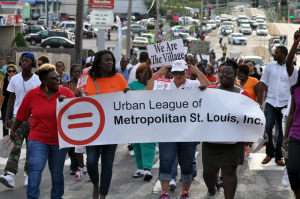 Ferguson protests. Photo by Loavesofbread (own work) via Wikimedia Commons

Yesterday, we wrote about what’s been happening in Ferguson, Missouri. Later during the day (we publish our posts very early in the morning as a rule), Thomas Jackson, Ferguson’s chief of police, had numerous press conferences which we feel raised more questions than they answered.

In the first press conference, Jackson announced the name of the officer who shot Michael Brown; a four year veteran of the force named Darren Wilson. At the same time, he said that Michael Brown was suspected of stealing a box of cigars and assaulting a convenience store clerk. He then produced a surveillance tape that appears to show Brown assaulting the clerk. Seems pretty straight forward, right? Well, no – not really.

When Jackson was asked later why he released the tape at the press conference, he said because he “had to,” based on several formal requests from media organizations. Now, as far as we know from reading and listening to the media over the last few days, the media had no idea that such a tape existed. What we do know is that the media had been requesting the officer who killed Brown’s report on the incident, as well as any dash camera video if any existed. Did Jackson produce either of those things? Of course not. And, of course, Officer Wilson is conveniently out of town “for his own protection.”

At this press conference, it was implied that Officer Wilson had been responding to the convenience store incident when he stopped Brown. However, in a later press conference, Jackson stated that the “initial contact was not related to the robbery,” and that Brown had been stopped for walking down the middle of the street. We have to wonder when jaywalking became a legitimate reason to use deadly force, but we digress as usual. 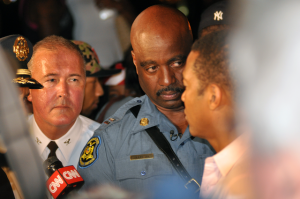 Captain Ron Johnson, the Missouri state patrol officer who took command of the various police forces in Ferguson on Thursday, said that he “would have liked to have been consulted” about the simultaneous release of the officer’s name and the information about the alleged robbery. “The information could have been put out in a different way,” Johnson said at a press conference.

Now hold on – isn’t Johnson supposed to be in charge of the police who are dealing with this matter? Why wasn’t he consulted? Jackson’s response was that he had used the same chain of command he’d been using before Governor Jay Nixon had put Johnson in charge; in other words, his Ferguson police and the St. Louis County police’s officer in charge. We have to wonder whether ignoring the governor’s orders is par for the course for the Ferguson police.

In related news, Bob McCulloch wasn’t happy with the governor’s decision to turn control of security over to Johnson, telling the St. Louis Post-Dispatch; “It’s shameful what he did today, he had no legal authority to do that. To denigrate the men and women of the county police department is shameful.” Who is Bob McCulloch and why is this important? He’s the prosecuting attorney for St. Louis County; the very person who would be responsible for bringing any charges against Officer Wilson. We guess he evidently didn’t see any problem with turning Ferguson into a war zone, but we could be wrong.

We feel that yesterday’s disclosures raises more questions than it answered. The first question is if they had this information about Brown and the alleged robbery before, why didn’t they disclose it earlier? We’d think that releasing this information earlier would have helped defuse the anger in the community; the community would have still been angry, but the police could have at least claimed that to be the cause for Wilson’s actions.

Our second question is why wasn’t Officer Wilson’s report released? We find it suspicious that they released the surveillance tapes allegedly of Brown assaulting the convenience store owner when as far as we know, nobody outside the police were aware that they existed, yet fail to release the documentation that everybody’s been asking to see.

Our last question may be the most important of all. Is the Ferguson police department in general and Chief Jackson in particular really this incompetent, or are they covering up something? Our guess would be both.