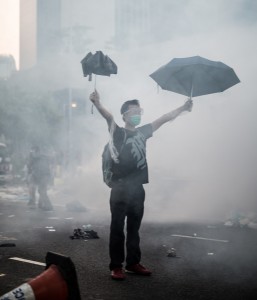 There’s been a major upheaval happening for the last three months halfway around the world; yet the Western press has only covered it in fits and starts. If you’re a regular reader here, you probably know the basics of the Umbrella Revolution; we’ve covered both the protests in July and the beginning of the current wave of unrest and how it became known as the Umbrella Revolution. What had been for the most part peaceful protest turned violent this week, as the police began to crack down.

On Monday, the New York Times ran an op-ed by Shiu Sin-por, the head of The Central Policy Unit of of the Hong Kong Special Administrative Region (the Beijing government). In it, he claimed that the pro-democracy protesters must accept Beijing’s powers as defined in the Basic Law; what China says is the constitutional document that specifies how Hong Kong is governed. In remarks made to the China News Service (a state-run news organization), Zhang Xiaoming, the head of the central Chinese government’s Liaison Office in Hong Kong, said the movement had “provoked” the central Chinese government and engaged in “radical forms of street confrontation,” and that China’s central leadership was “paying very close attention to the current developments.”

Then, on Tuesday morning, police using chain saws and sledgehammers cleared away the barricades that protesters had put up around two sites, and reopened several major roads that the protesters had blocked. Early Wednesday morning, students and the police clashed, with the police using riot shields, batons and pepper spray. The police made 45 arrests, and four policemen were injured. However, it’s the other thing the police did that has Hong Kong up in arms.

A video shot and broadcast by TVB, a usually pro-government television station, showed at least six plainclothes Hong Kong police officers dragging a pro-democracy protester into an alley, where he was kicked and beaten by them. The public reaction to this was as you’d suspect. “I thought a situation like this would only be seen in foreign countries, other societies — I didn’t expect to see it in Hong Kong,” said Ronny Tong, a Civic Party member of Hong Kong’s Legislative Council.

Audrey Eu, the chairman of the Civic Party, said; “Whatever they might charge him with, both his hands were tied behind his back with a plastic tie, and he was carried by police officers to a dark corner where he was assaulted for four minutes. I don’t know what has come over the police. It’s criminal.”

Hui Chun-tak, a spokesman for the Hong Kong police, said the authorities would conduct an “impartial and fair investigation” over the beating. Meanwhile, a front page commentary in the People’s Daily (the official Communist Party newspaper) praised Leung Chun-ying (Hong Kong’s Chief Executive)’s handling of the protests and further said the calls for his dismissal from protesters were part of a plot to force the government into unacceptable concessions.

As we’ve said before, we’re struck by how much the situation in Hong Kong parallels our own here in the U.S. Rampant income inequality, a lack of affordable housing, and many more. Even the way candidates are chosen for the highest office are similar; the only difference is that here we pretend the special interests who control the government and choose which candidates will run aren’t actually who’s in charge.