One of our favorite topics is fracking and the harm it does to the environment. We’ve discussed how fracking can poison the groundwater and aquifers in the areas where it goes on. We’ve found evidence of gas (notably methane) getting into and contaminating the water supply through poor cement jobs or fractured pipe at fracking wells. However, we’ve never had a way to prove that other chemical contamination was a direct result of fracking, or was caused by some other unknown factor. That is, we haven’t until now. 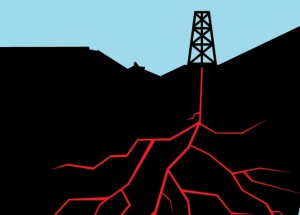 In a study published on Monday in the journal Environmental Science & Technology, researchers have identified geochemical tracers that can identify flowback fluids from hydraulic fracturing that have spilled or otherwise released into the environment, and can distinguish between those fluids and contamination that results from other processes.

Duke University geochemist Avner Vengosh, who co-led the research, said; “By characterizing the isotopic and geochemical fingerprints of enriched boron and lithium in flowback water from hydraulic fracturing, we can now track the presence of ‘frac’ fluids in the environment and distinguish them from wastewater coming from other sources, including conventional oil and gas wells. This gives us new forensic tools to detect if frac fluids are escaping into our water supply and what risks, if any, they might pose.”

One of the big issues with fracking is that companies weren’t required to disclose the chemicals that make up their fracking fluids- in fact, it’s a crime to do so in North Carolina. With the tracers though, scientists no longer need to know the chemical makeup of the fluid to determine whether or not it’s getting into the environment.

Duke University geochemist Avner Vengosh told ThinkProgress; “This is one of the first times we’ve been able to demonstrate that, here, you have a spill in the environment, and yes, this is from fracking fluid and not from other source of contamination. It’s a pretty cool way to overcome the issue of trade secrets.”

Occupy World Writes applauds their ingenuity. We further call on all state and federal environmental agencies to require and administer these tests in all areas where fracking is taking place. Will it be expensive? Not half as expensive as letting our water become contaminated would be.

We don’t need your secret formulas to be able to tell if you’re poisoning us or not.