On the Saturday before Christmas, over 3,000 people gathered at the nation’s largest shopping mall as part of the Black Lives Matter protests that were happening nationwide at the time. We wrote about the MOA protest and how the various local media outlets chose to cover it, and wondered what the aftermath would be. 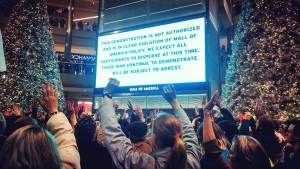 Yesterday, the City of Bloomington charged ten of the organizers of the protest with between three and seven misdemeanors each, depending on their supposed role in the demonstration. The various charges include trespassing, public nuisance, disorderly conduct, and unlawful assembly. Each charge is punishable by a maximum of 90 days in jail and a $1,000 fine. Twenty five other people are expected to be charged, according to city officials.

Bloomington City Attorney Sandra Johnson says she plans to attempt to get the organizers to pay for police overtime and extra mall security. The city claims that they spent more than $25,000 on police overtime while the Mall of America paid more than $8,000 for additional security on the day of the rally.

Mica Grimm, one of the people charged, said in a statement; “These charges are absurd. The implications of forcing protesters to pay for police presence they didn’t ask for sets a dangerous precedent that could potentially affect all citizens and negates the very rights afforded by the constitution to peacefully assemble.”

Grimm went on to say; “We will not let these charges silence us. Our message that Black Lives Matter is needed more than ever as just hours ago St. Paul police took the life of another black man under muddled circumstances. Every 28 hours a black person is killed by police or vigilantes.”

Charles Samuelson, executive director of the American Civil Liberties Union of Minnesota condemned the charges in a statement; “It is unfortunate that the Bloomington City Attorney has chosen to focus so much time, energy, and taxpayer resources to pursue vengeance for a peaceful gathering on these important issues. Rather than joining the dialogue that has arisen from this national movement, the City has instead chosen to try and silence those who are speaking out.”

We agree. We have to ask Sandra johnson, as Jon Tevlin so bluntly puts it in an article in the StarTribune; “Why do you hate the First Amendment, and do you work for the city of Bloomington or the Mall of America?”

We really fail to see how a place that’s received heavy tax subsidies from we the people and depends on large numbers of the public visiting daily in order to survive can really be considered private property when it comes to freedom of assembly issues. Aren’t they essentially asking us to assemble there every day?

On Monday night, the Bloomington City Council met, and passed a proclamation honoring the Rev. Martin Luther King Jr. They also had numerous people ask for leniency towards the protesters, and to live up to Dr. King’s idea of justice. The hypocrisy shown by their actions yesterday is staggering.