Two days ago, Greece held national elections. The anti-austerity Syriza party was the big winner, coming up two seats short of an absolute majority in the Greek parliament – they won 149 out of 300 seats. But, what does this actually mean for Greece going forward? First, we have to understand how Greece got to where it is today. 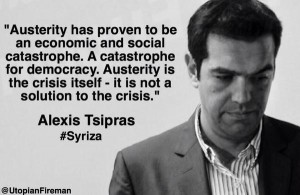 For the last few years, we’ve been hearing dire predictions of Greece going bankrupt. A decade’s worth of overly high structural deficits and debt-to-GDP on public accounts made investors in late 2009 afraid that Greece couldn’t meet its debt obligations.

Then, in 2010, it was discovered that Goldman Sachs, JPMorgan Chase and numerous other banks had assisted the governments of Greece, Italy and many other European countries to hide how much they were borrowing. The banks supplied cash in advance in exchange for future payments by the governments involved; in turn, the liabilities of the involved countries were “kept off the books.”

This led to a further lack of confidence among investors, and in 2010, the other Eurozone countries and the International Monetary Fund (IMF) agreed to giving Greece an immediate €45 billion in loans, with another €65 billion to follow. However, in order to receive the loans, Greece had to agree to adopt harsh austerity measures in order to bring its deficit under control.

However, in 2011, it became evident that the €110 billion wasn’t going to be enough, and a second bail-out amounting to €130 billion ($173 billion) was agreed to in 2012. This had its own set of conditions attached, including financial reforms and more austerity measures. This had the result of throwing hundreds of thousands of people out of work and left nearly a third of the country without state health insurance.

Since 1974 when the Greek military junta was removed from power and democracy was restored until recently, the two main political parties in Greece were the New Democrats (ND) and the Panhellenic Socialist Movement (PASOK). As is usually the case with European political parties, we don’t really have anything resembling their ideologies in the states, with the ND billing itself as liberal-conservative and PASOK calling themselves social-democratic.

Alexandre Afonso, in a piece published by CNN, describes what he calls “cartel politics”, which is how the ND and PASOK held on to power for so long:

“For four decades, politicians from both parties built their electoral success on the distribution of political spoils in exchange for votes: public sector jobs (for their affiliated trade unions), infrastructure projects, protection from competitors through licensing and closed shops (for taxi drivers; truck drivers), and social benefits targeted at particular occupations, among other perks and benefits benefiting party supporters.

‘Pork barrel politics,’ as it is known, has long been the cornerstone of Greek politics — and also one of the causes of the deep economic problems it is facing now.

This immensely costly system was able to survive at the cost of high inflation and currency devaluations (before the euro) or mounting public debt (since Greece’s entry into the euro). But when the interest rates on government bonds shot up and debt could no longer be used to finance the spoils system, Greece was taken to the brink of bankruptcy.”

Since 2009 and the start of Greece’s government-debt crisis, support for both of the former major parties has declined dramatically, with over half the population disapproving of their policies. Enter Syriza.

Syriza (also known as the Coalition of the Radical Left) originally was a broad collection of groups from the left of the political spectrum, including democratic socialists, populists, green activists, Maoists – you get the picture. It’s since evolved to more of an anti-establishment party than anything else, becoming more populist as time went on. They’re definitely on the left of the political spectrum- which brings up the first obvious obstacle.

In order to have a majority in the parliament, yesterday Syriza formed a coalition with another anti-austerity party, the Independent Greeks. The problem with this is that anti-austerity is the only common thing between the two parties’ platforms. The Independent Greeks are a right-wing party, with opposite views on almost everything from immigration to the role of the Orthodox Church in education. We have a hard time understanding how the coalition will remain intact when the parties involved are diametrically opposed on so many issues.

There’s also the EU’s reaction. Syriza’s victory is bound to be an inspiration to other southern European countries who are under austerity measures such as Spain. Syriza’s platform of forcing the European Commission, the IMF, and the European Central bank (who make up what’s commonly called the Troika) to forgive some Greek debt and allow the country to enact a program of stimulus spending sets up a battle between Greece’s creditors and the Greek government; one that could easily spread to other members of the EU; an event that some people say could be the beginning of the end for the Eurozone.

We don’t know how this is going to end. We’d like to think that the Troika has learned by now that austerity doesn’t work, but we aren’t holding our breath.