Sunday, March 8, 2015 is International Women’s Day. This year’s theme is “Make Change Happen” and will be recognized around the world as women gather in discussion, workshops, rallies and through outreach programs to not only celebrate the achievements of women in the past, but to also encourage future endeavors and accomplishments.

Make Change Happen. We thought about that theme in the process of selecting our International Women’s Day choice for 2015. We thought about all the struggles women face, and recognized that the basic survival many women are challenged with is fundamental to all other rights. The right to exist, to breathe, to speak, to live, this is needed before all else. 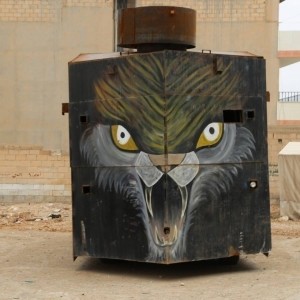 Without tanks and military grade equipment, the YPJ has used farm equipment, sheet metal and their artistic flair to bring terror to their enemies while protecting their troops. Image via Facebook.

Who best demonstrates this essential right and challenge facing women in the world today? With the world focused on Daesh and the battle to defeat them, we are reminded of their reprehensible behavior toward the women they capture. Who is most defiant of this horror?

The YPJ Kurdish Female Fighters are our 2015 International Women of the Year for knowing how to Make Change Happen. Against all odds, they have taken the Middle East in a firestorm of popularity with followings from Israel to the US. Not new to war, not new to battle, these women are tough, brave and relentless in their mission.

This is not the first time we have talked about the YPJ. At the end of October, while the battle for Kobani raged on, we published “Kobane: the struggle of kurdish women against Islamic State.” This piece was quite detailed and gave a good background. Prior to that, “This is no way to peace” appeared.

The YPJ is reputed to be a fierce force to encounter. They strike terror in the hearts of the enemy when going into battle by shouting so it is known they are women. The YPJ are aware of the belief of the jihadists that to be killed by a woman would prevent them from their prize of 72 virgins if they die a martyr’s death. We also know that ISIS has all-female battalions, called “al-Khansaa” and “Umm al-Rayan,” that operate in Syria. ISIS female fighters wear full burqas and carry rifles; they exist to force other women to comply with ISIS’s vision of sharia.

The following was chosen as a video that depicts the spirit and ideology of the YPJ. Don’t worry about reading the subtitles; we wrote them out for you and placed them under the video clip. We want you to look at her eyes and her face when she speaks these words.

Her words in English: “In the distant past, women were deemed sacred, and in time, men in general, and in this region in particular, deprived us of our rights. We became an object that can cook, raise children and serve. So now, we are retrieving the status we deserve. By enlisting to the guerrilla forces, my friend and I are proving that a woman can do everything a man does. So our struggle is not only for Kurdish women, but for women the world over.”

The interviewer remarks, “You know ISIS will kill in order for you not to implement this idea.”

“I don’t care. I’m not afraid. They should fear me. I know very well what ISIS is. They are merely human beings. I am a human being too. They know how to fight, I know how to fight too. They have guns, I have a gun too. What I have and they don’t is a purpose worth fighting for. This empowers me. I’m here to protect my existence. I am fighting to live. They are fighting to die.”

Zozan Curdi is only one of thousands of women with this vision. The Rojava region is governed by the Rojava Constitution, one of the finest examples of true democracy the Middle East can point to. The Rojava spirit is spreading, as observed by writer Adam Barnett in an article in Dissent. These beliefs and tenants are principles that reflect the driving force for survival and the relentless drive toward a future of hope and independence. 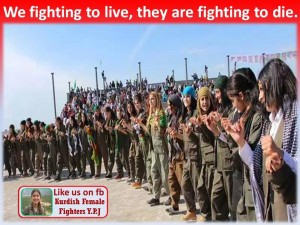 Zozan Curdi’s infamous words have become the battle cry for the YPJ forces. Image via Facebook.

Thousands of women from across North Kurdistan and Turkey are flocking to the village of Mehser at the Kobanê border for a massive regional rally to be held March 8 to mark International Women’s Day. Included in the celebration is the planned reading of a message from Ocalan and a calling on women to develop self defence mechanisms and to strongly resist male dominance. We salute them and send our sincerest wishes for continued success. We thank them for their inspiration, dedication and spirit that reignites the momentum of the women’s movement around the world.

You can learn more about the YPJ on their Facebook page.

Occupy World Writes thanks Demet Arpacik for her contributions toward this article.