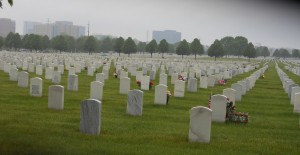 A sea of graves spreads across the Fort Snelling National Cemetery landscape. (Photo author’s own work.)

Across this country, today will see services at cemeteries as we observe Memorial Day. Most people will drive by a cemetery on their way to their recreation spot for the weekend, and that is about as much thought as they will give to the real reason the unofficial beginning of summer arrives with this day every year.

It all started in 1865 when black residents of Charleston, SC, decorated the unmarked graves of 257 buried soldiers, improved the landscape around the graves and brought honor to those who had been forgotten. Within a few years, nearly every state had their own observations during the same time of year, and by 1967 it became a federal holiday with the current name.

But there are some who remember. Some who actually memorialize the day by going to a cemetery. Some take their children, and begin teaching that this is important. To remember and honor brings respect to a family and to the next generation. 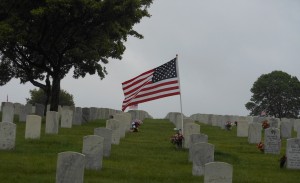 Rows of the dead… but not forgotten. (Photo author’s own work.)

Fort Snelling National Cemetery sits on 436.3 acres of federal land. As of 2014, it was the burial spot for 208,000 veterans, their spouses and minor children. Driving through on a weekend such as this you will see dozens – if not hundreds – of people coming to pay respects. Traffic is a nightmare, the weather will not stop them, and the rows upon rows of graves are given their adornments of flowers, flags and other markings in the long-held human tradition of marking the graves of our loved ones.

Somewhere in the middle of these two extremes fall the majority of Americans. Those that consider themselves “patriotic.” They support the troops, pay their taxes and wave American flags in their yards and at summer parades. They cheer their sports teams on after the token national anthem is sung at the beginning of an event.

Few of them stop to recognize the changes this country has gone through just during one lifetime, let alone over a couple generations. People used to know what to do when the flag passed in front of them. It was not that long ago that those that chose to fly a flag knew when to bring it in; not leave it up after dark without a light or in extreme inclement weather. We used to hold respect for the office of the president, despite our personal feelings about who may be in that office at any given time.

We fear the extended weekend trips to the cabin are far more important to many people today. We regret the time that is coming when there are no National Parks to go to that do not have corporate presence there when you arrive. Memorial Day is certainly not what it was in years gone by, and at the rate we are going, it will never recover its former glory.

Families mark the graves of their loved ones at Fort Snelling National Cemetery. (Photo author’s own work)