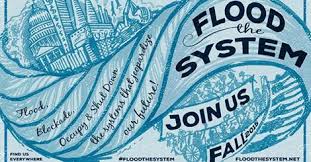 From the tar sands of Alberta to the Port of Seattle to the communities in the blast zone of oil trains, organizers across North America are calling for a “wave of resistance” this fall to “shut down the economic and political systems threatening our survival.”

Under the banner of “Flood the System,” the announcement was unveiled Wednesday by Rising Tide North America, part of an international climate justice network. The mass actions, slated for September and November, are timed to lead up to the United Nations COP21 climate negotiations slated to take place in Paris in November and December.

Organizers say they are targeting the international gathering in order to highlight exactly what is not working. “[T]he UN Framework Convention on Climate Change (UNFCCC) process has been co-opted by elite interests and… any Paris outcomes will be insufficient to meaningfully address the climate crisis and ensure justice for the majority of the world’s people,” declares a press statement.

But the real target goes far beyond any one event or body. “We need to wash away the root causes of climate change—capitalism, white supremacy, patriarchy and colonialism,” reads the group’s call-to-action. “These systems enable the domination of people and Earth. They place gains for the elite before the well being of our communities.”

So as people from around the world mobilize and demand meaningful change at the talks in Paris, and highlight grassroots solutions, Flood the System will stage direct actions across North America.

Sandy Nurse, organizer with the New York City chapter of Rising Tide, told Common Dreams that the network is urging people to plan their own actions locally and coordinate regionally and continentally through spokescouncils—formed when affinity groups come together around a common purpose. Nurse said that, while actions are not yet public, “there are a lot of ideas. Groups might block oil trains, they might block fossil fuel destruction.”

Organizers in the U.S. and Canada are having “initial conversations” with groups in Mexico about the coordinated actions.

If past actions are any indication, Flood the System will make a big splash.

Rising Tide Seattle is one of the organizations behind last week’s series of direct actions—by land and sea—to protest Shell Oil’s arctic drilling fleet in the Port of Seattle.

Furthermore, many of those organizing Flood the System were involved in last year’s more than 400,000-strong People’s Climate March in New York City, followed by the “Flood Wall Street” demonstration and sit-in attended by thousands in the financial district of lower Manhattan—the hub of global capitalism.

Organizers say Flood the System looks to other movements for inspiration, especially those “led by low-wage workers, immigrants, and communities responding to police brutality,” with many Rising Tide organizers directly involved in, or allying with, these various struggles.”

“There is a sense that there is so much happening right now that is powerful and empowering from the grassroots,” said Nurse. “People are expressing anger, taking to the streets, not fearful, and very activated in a way that has caught the imagination of the entire country and many places around the world.”

“Communities on the front lines of fossil fuel extraction are fighting back,” said Ahmed Gaya, an organizer with Rising Tide Seattle, in a statement. “From Seattle, to Alberta, to Appalachia, people are organized in opposition to extraction, and taking action to uproot the systems driving the crisis.”

Editorial Note: Occupy World Writes stands in solidarity and supports organizations, groups and individuals that believe in non-violent actions to bring about needed change in the world where voices of dissent are being drowned by corporations, governments and the top wage earners of the planet.