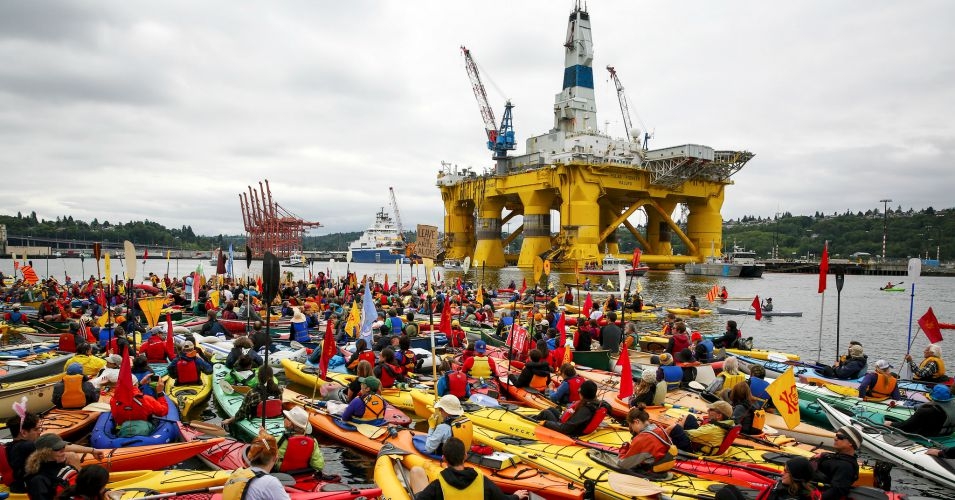 Activists surround a Shell drilling rig in Seattle as the oil company attempts to move its vessels into the Arctic for a drilling operation. (Photo: Backbone Campaign/flickr/cc)

Royal Dutch Shell on Friday announced that it would not renew its partnership with the American Legislative Exchange Council (ALEC), citing the corporate lobbying organization’s continued denial of climate change, in a move that environmental groups say does nothing to absolve the oil giant from its destructive business model.

“ALEC advocates for specific economic growth initiatives, but its stance on climate change is clearly inconsistent with our own,” said Shell spokesperson Curtis Smith on Friday. “We have long recognized both the importance of the climate challenge and the critical role energy has in determining quality of life for people across the world. As part of an ongoing review of memberships and affiliations, we will be letting our association with ALEC lapse when the current contracted term ends early next year.”

For decades, ALEC has pushed against federal efforts encouraging private companies to invest in renewable energy sources. Shell follows BP as the latest oil giant to abandon the controversial right-wing group after a campaign led by the Union of Concerned Scientists. According to the Guardian, the Canadian National Railway—a major coal transporter—also quietly severed its financial ties with ALEC on Friday.

But while the campaign against ALEC helps highlight the group’s role in spreading climate science denial, simply ending partnerships with it is not enough to salvage the fossil fuel industry’s reputation among environmental activists—particularly as Shell continues its controversial mission to drill for oil in pristine Arctic waters.

As Greenpeace spokesperson Travis Nichols said on Friday, “It’s a bad sign for the climate denial movement that ALEC’s rhetoric is too extreme even for a cynical exploitative corporation like Shell. It’s also clear that Shell’s ill-conceived Arctic drilling plan is causing a PR panic, but this move won’t fix Shell’s bad name.”

“It’s completely absurd for Shell to claim it wants to confront climate change while engaging in this destructive plan to drill in the Alaskan Arctic,” Nichols continued.

Charlie Kronick, a senior campaign adviser with Greenpeace, told the Guardian: “Shell is being dragged kicking and screaming out of [ALEC] due to investor and public pressure. But they have a long way to go to bridge the massive gap between the reality of their business plans, most notably their catastrophic plan to drill in the Arctic, their other anti-climate lobbying, and their claimed leadership on climate change.”

Added Nick Surgey, director of research at the Center for Media and Democracy: “It’s obviously a positive step for Shell to stop funding [ALEC] and its climate change denial. Other oil companies should join them. Unfortunately this is another occasion when Shell’s positive language about climate change doesn’t match their actions. Drilling for oil in the Arctic might turn a profit for Shell, but it must be stopped if we want to avoid catastrophic climate change.”