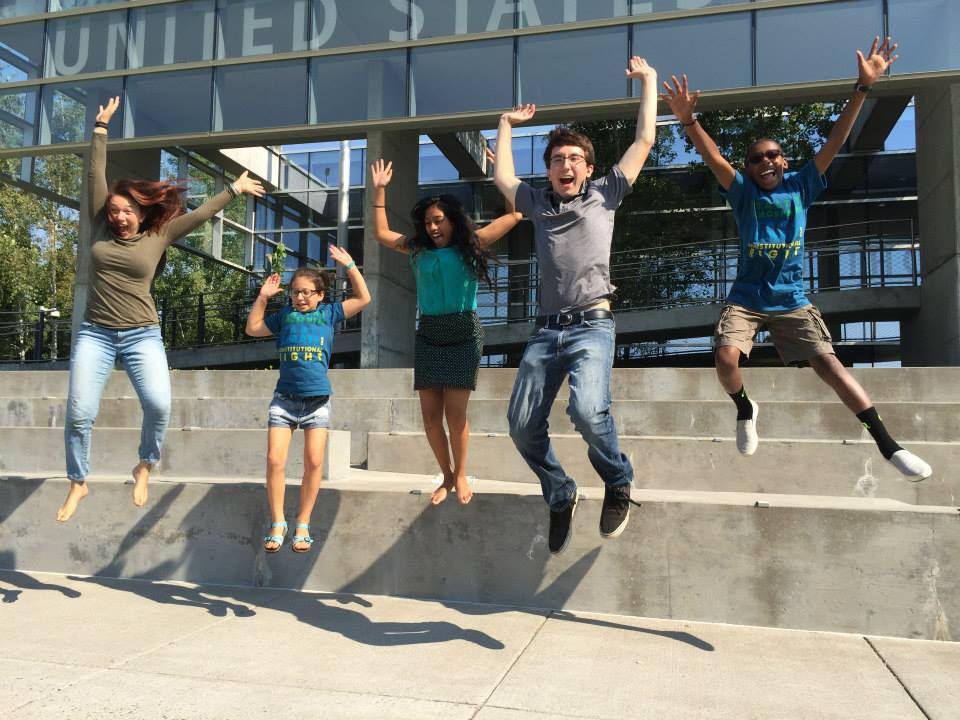 Claiming that the continued development and burning of fossil fuels violates their constitutional rights, 21 young plaintiffs—ranging in age from 8 to 19—filed a landmark climate change lawsuit against the federal government on Wednesday.

“The federal government has known for decades that CO2 pollution from burning fossil fuels was causing global warming and dangerous climate change,” said one of the teenage plaintiffs and youth director of Earth Guardians, 15-year-old Xiuhtezcatl Tonatiuh Martinez of Colorado. “It also knew that continuing to burn fossil fuels would destabilize our climate system, significantly harming my generation and generations to come.”

Despite that knowledge, the government “continued to authorize and promote fossil fuel extraction, production, consumption, and all their associated emissions—to the grave detriment of future generations,” added attorney Philip Gregory of the California firm Cotchett, Pitre & McCarthy, a counsel to the plaintiffs.

Lawyers working on the case say a win for the kids would be no less important, from a strictly legal basis, than Brown v. Board of Education, which established the right to equal educational opportunity, or Obergefell v. Hodges, which much more recently established the freedom to marry.

As MSNBC reports, the lawsuit “debuts a new legal framework to fight climate change, one that portrays federal support for the development and use of fossil fuels as a violation of the Fifth and Ninth Amendments, as well as the public trust doctrine.”

The public trust doctrine ensures “the rights of present and future generations to those essential natural resources that are of public concern to the citizens of our nation,” reads the complaint. “These vital natural resources include at least the air (atmosphere), water, seas, the shores of the sea, and wildlife. The overarching public trust resource is our country’s life-sustaining climate system, which encompasses our atmosphere, waters, oceans, and biosphere. Defendants must take affirmative steps to protect those trust resources.”

Accompanying the youth’s legal complaint (pdf) was an “expert declaration” (pdf) from former NASA scientist James Hansen, who first sounded the alarm on climate change in 1988. Hansen’s granddaughter, 17-year-old Sophie Kivlehan of Pennsylvania, is among the plaintiffs.

“In my opinion, this lawsuit is made necessary by the at-best schizophrenic, if not suicidal, nature of U.S. climate and energy policy,” Hansen wrote.

“It is now clear, as the relevant scientific community has established for some time, that continued high CO2 emissions from fossil fuel burning will further disrupt Earth’s climate system, and that, in turn, will impose profound and mounting risks of ecological, economic and social collapse,” he continued. “In my view, our government’s actions and inactions that cause or contribute to those emissions violate the fundamental rights of Sophie, other Youth, and future generations. Those violated rights include the right to life, the right to liberty, the right to property, the right to equal protection under the law, the right to government protection of public trust resources, and the right to retain a fighting chance to preserve a habitable climate system.”

The complaint includes each plaintiff’s individual story and the ways in which they are harmed by climate change now and will be in the future if the court does not, as they lawsuit asks, order the federal government to decrease atmospheric concentrations of carbon dioxide to a safe level.

For example, 15-year-old Nathaniel Baring, of Alaska, is described as an “avid Nordic skier” who has been “harmed by the reduced snowfall in recent years.”

Journey Zephier, a 15 year old who lives with his family in Hawaii, has been adversely impacted by rising sea levels, beach erosion, and ocean acidification.

Eleven-year-old Sahara Valentine, an Oregon resident who has asthma, says her condition has been exacerbated by severe climate change.

And Victoria Barrett, a 16 year old from New York, “has become emotionally distressed by the increase in superstorms in the Northeast,” the complaint reads.

The case is part of a global legal campaign led by Our Children’s Trust, a nonprofit organization that is coordinating a federal, state, local, and global effort to secure the legal right to a healthy atmosphere and stable climate.

And there are signs the strategy could be successful.

In the Netherlands in June, an organization partnered with Our Children’s Trust won a similar case, with a Dutch court ruling that the government has a legal duty to reduce carbon emissions by 25 percent by 2020.

“The state must do more to avert the imminent danger caused by climate change, also in view of its duty of care to protect and improve the living environment,” read a statement from the Hague District Court at the time.

Also in June, a judge in Washington state handed a group of eight young petitioners—also backed by both Our Children’s Trust and Hansen—a landmark win, ordering the Department of Ecology (ECY) to consider statewide reductions in carbon dioxide emissions based on best available science.

“The court’s decision brings a feeling of triumph,” said 14-year-old petitioner Aji Piper in June. “But I know there is still a lot of work to be done. We may have won a battle, but we’re still fighting a bigger war.”