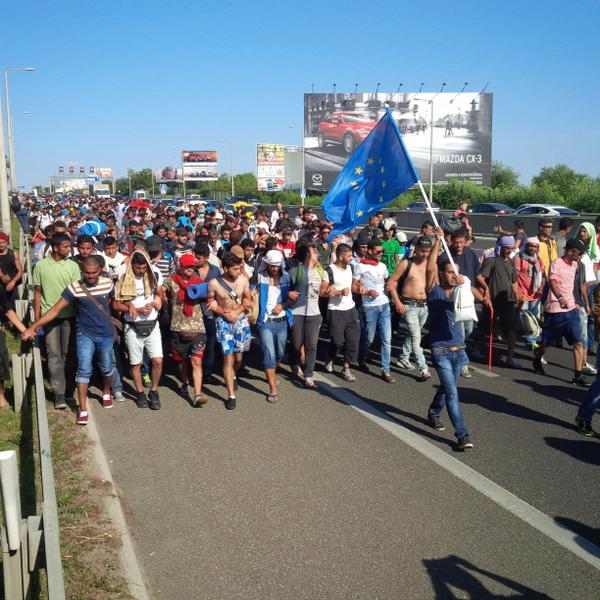 Thousands of refugees were welcomed into Austria on Saturday after epic journeys from Hungary that many were forced to begin to take on foot.

Hungary, which had spent days stopping migrants from leaving by train, provided buses to take them into Austria. The government relented under international pressure and after desperate refugees who had camped out at the Budapest train station simply began walking toward the border.

The New York Times describes their arrival as “the culmination of 10 days of tragedy and emotion that at last caught the world’s attention as war and chaos in Syria and elsewhere in the Middle East set off one of the largest emigrations since World War II.”

Walid, a Syrian refugee who had helped organize the march from Budapest, said, “This is a big victory. This is our victory. We never expected it to end to so fast. Now we are breathing the air of freedom here.”

The reception they received upon arriving in Austria was seen as a sharp contrast to how they had been treated in Hungary.

Wrapped in blankets and sleeping bags against the rain, long lines of weary people, many carrying small, sleeping children, got off buses on the Hungarian side of the boundary and walked into Austria, receiving fruit and water from aid workers. Waiting Austrians held signs that read “Refugees welcome”.

“We’re happy. We’ll go to Germany,” said a Syrian man who gave his name as Mohammed – Europe’s biggest and most affluent economy is the favoured destination of many refugees. Another, who declined to be named, said: “Hungary should be fired from the European Union. Such bad treatment.”

UN High Commissioner for Refugee applauded the efforts of those civil society groups offering a warm welcome to the refugees, saying in a statement Saturday that “all over Europe, [we are] witnessing a remarkable outpouring of public response, including from faith-based organizations, NGOs [non-governmental organizations] and individuals, in many cases driving governments to change policies and rhetoric.”

As more waves of refugees entering as conflicts in Syria, Afghanistan, and elsewhere force people to flee, human rights advocates have stressed the urgency of finding a humanitarian response to the massive influx.

“This has to be an eye-opener on how messed up the situation in Europe is now,” the Timesreports the Austrian foreign minister, Sebastian Kurz, as saying. “I hope that this serves as a wake-up call that this cannot continue.”

“Europe is showing a staggering lack of political will and humanity to grapple with this refugee and migrant crisis,” said Judith Sunderland, HRW’s associate Europe and Central Asia director. “EU leaders should be guided by the imperative to protect lives and ensure humane treatment.”

The Washington Post captured scenes of some those who had made the journey:

NBC News has video as well: