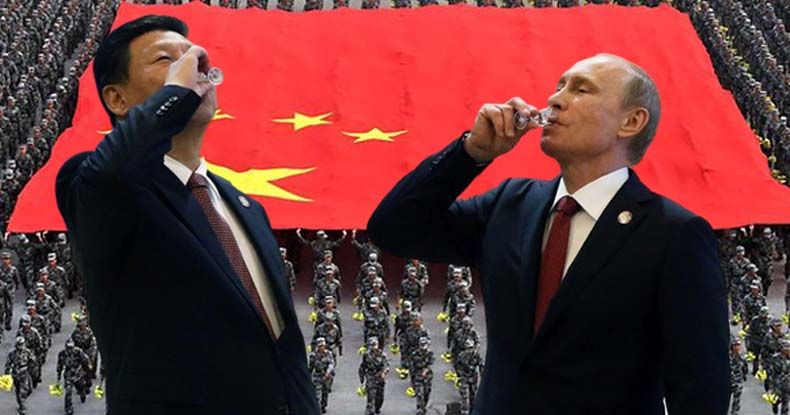 Moscow, Russia – With tensions mounting between the United States and both Russia and China, the Chinese and Russian military have announced their first-ever joint exercises to counter “incidental or provocative” missile attacks to be conducted in Russia later this month.

The missile war games follow an August 2015 naval exercise between the two nations – dubbed Joint Sea II – held in international territorial waters in the Sea of Japan and off the coast of Russia’s Primorsky territory – approximately 250 miles away from Japan. That exercise was the first ever joint Sino-Russian amphibious assault drill.

The military chiefs’ stressed that their ministries need to implement “greater unity and joint effort” to tackle modern security challenges during a press conference, with the defense ministries noting that the drills were not “aimed against any third nation.”

Of course, reality dictates that the increased Sino-Russian military cooperation is a direct result of an increasingly imperialistic Western alliance pushing closer to each state’s borders with every regime change that is undertaken.

“NATO military infrastructure is inching closer and closer to Russia’s borders. But when Russia takes action to ensure its security, we are told that Russia is engaging in dangerous maneuvers near NATO borders. In fact, NATO borders are getting closer to Russia, not the opposite,” the Russian Foreign Minister Sergey Lavrov told Sweden’s Dagens Nyheter daily.

There is a continual expansion of NATO eastward that now allows for forces to be deployed on Russian borders, yet Western voices disingenuously claim that “Russian aggression” is precipitating the deployments. Similarly, recent FONOPS by the U.S. in the South China Sea are seen by the Chinese as an overt display of U.S. military might meant to intimidate the Chinese into compliance and violating their territorial sovereignty.

Speaking of attempts to put pressure on China, Chinese Foreign Ministry official, Ouyang Yujing, compared China to a spring that will bounce back with the same or even greater force if too much pressure is applied.

“If they are aimed at putting pressure on China or blackening its name, then you can view it like a spring, which has an applied force and a counterforce. The more the pressure, the greater the reaction,” he said, probably hinting at the military installations Beijing has already erected on the disputed islands.

The U.S. and South Korea claim that the system is necessary to protect America’s allies from a missile threat from North Korea, but the plan was criticized by both China and Russia, which said such a move would upset the balance of power in the region.

Interestingly, similar claims were made by the U.S. about missile defense interceptors being placed in Europe to protect against a possible Iranian bomb, which has since been revealed as being implemented as an American hedge against Russia.

For the U.S. to posture and provoke both the Russians and the Chinese in a manner that will ultimately force them into a defensive military conflict is nothing short of insanity. The United States would certainly feel threatened if a Russian force was amassing on its border, or if the Chinese were sending naval destroyers through the Gulf of Mexico or the Caribbean, and would certainly feel justified in defending themselves against such provocative actions.

As is the case, unfolding before our eyes, U.S. hegemonic ambitions only serve to force the other major militaries in the world to consolidate their power as a hedge against American imperialism, as they increasingly feel threatened by the predatory Western alliance. While precipitating this type of conflict might be a major win for the U.S. military industrial complex, neocons, and war hawks, the world may not survive such a cataclysmic collision of world powers.

In spite of Chinese and Russian claims to the contrary, these joint military drills are almost certainly meant to send a clear political signal to the United States and its allies in the region that Sino-Russian military ties are deepening in response continued imperial aggression by the West.