“Have Congressional Republicans forgotten about Flint? Or maybe it’s that they just don’t really care.” 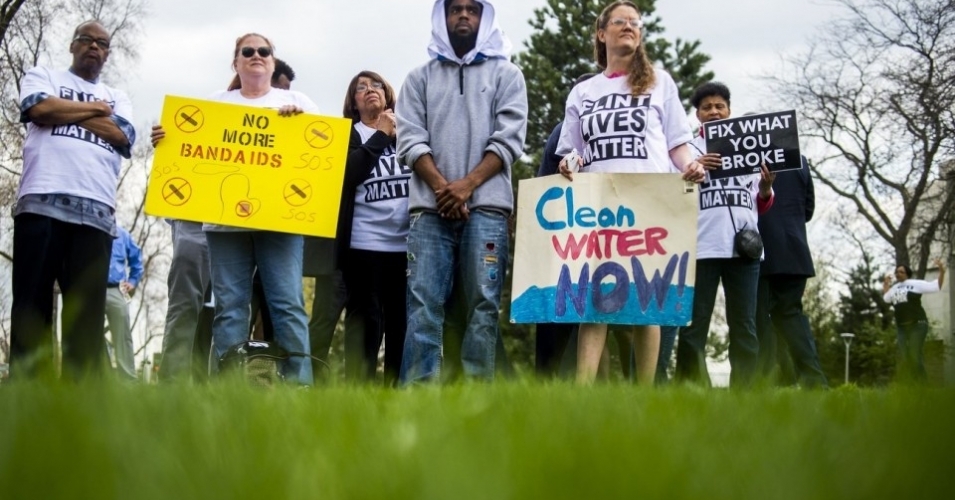 “The people of Flint deserved assistance more than a year ago, and they require assistance now, without further delay.” (Photo: Jake May/MLive)

Even as Flint residents continue to struggle to provide clean drinking water for their families, Republican lawmakers in the House and Senate appear to be thumbing their noses at the Michigan city, excluding Flint assistance from a must-pass spending bill ahead of (yet another) congressional recess.

“Have Congressional Republicans forgotten about Flint?” The Flint Journal wrote in an editorial on Monday. “Or maybe it’s that they just don’t really care.”

News outlets reported late last week that the Senate’s proposed Continuing Resolution (CR)—a short-term funding agreement that would keep the government operating after the current budget expires on October 1—did not include emergency funding for the beleaguered community that has been grappling with a long-term lead-contamination crisis. The proposal did include flood assistance for states such as Louisiana and Maryland.

House Speaker Paul Ryan (R-Wis.) backed that approach, telling reporters, “For Flint, this is more of a local government issue,” and pointing to aid for Flint that’s included in the Senate-passed Water Resources Development Act (WRDA). The House is set to bring up its version of the WRDA bill, which does not currently include Flint relief, this week.

But Democratic elected officials were incensed.

“It sends a pretty strong message,” Kildee said. “What is it about Flint that distinguishes it from these other places that rightfully qualify for help? I support helping the people of Louisiana. I am all in. What I cannot accept is a bunch of excuses, a bunch of irrelevant excuses that again leave Flint behind. It is a poor community. It is a majority African American community. It is very difficult to believe that if the conditions in Flint had occurred in a much more affluent community. … I have no doubt in my mind that the response would have been different.”

Flint—a majority African-American community—has become a living, breathing symbol of inequality in the country as residents there bathed in and drank lead-poisoned water for two years. Voting against Flint just six weeks ahead of the election would not only send a message to Flint, it could also send a message to African Americans that Congress doesn’t care about them.

Now, Roll Call reports Monday that the matter of Flint aid is “at [the] center of [a] possible looming government shutdown.”

According to the publication:

A senior Democratic aide said Senate Democrats are expected to block the stopgap spending plan that’s currently on the table.

Even if Senate Majority Leader Mitch McConnell can rally enough votes for his continuing resolution (he’ll need more than a handful of Democrats given opposition from some members of his own conference), the legislation likely would not arrive in the House until Wednesday or Thursday, meaning that the House vote would be all-but-certain to take place on the verge of government funding expiring.

Meanwhile, a coalition of 86 national civil and human rights, faith, and environmental groups issued an open letter to Congress on Monday, beseeching lawmakers to include Flint relief in the CR this week.

“Congress must act to address emergencies whenever and wherever they occur, and the need is most acute when our most vulnerable communities are struck by disaster,” reads the letter, coordinated by The Leadership Conference on Civil and Human Rights. “This is true regardless of whether a disaster strikes in a red state, a blue state, or a purple state. Republicans who demand federal aid for their home states should also ensure funding for Flint, a community overwhelmingly composed of people of color and with nearly 40 percent of its residents living below the poverty line.”

“It is inequitable to provide relief for Louisiana now, but to once again punt on assistance for Flint,” the letter continues.

As for the WRDA, the groups said they “were heartened to finally see some positive movement forward on relief for Flint,” but went on to explain why “this is not enough.”

“There has been no guarantee from House Republicans that they will include adequate relief for Flint in the House version of WRDA,” the letter reads, “and we have no idea when a final bill would get to President [Barack] Obama’s desk. The people of Flint deserved assistance more than a year ago, and they require assistance now, without further delay. Therefore, it is critical that aid comes now so that other children and families will not suffer.”