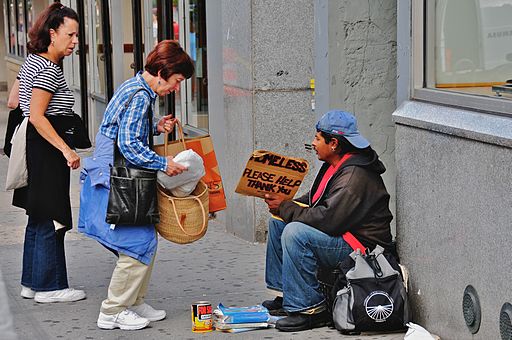 Police departments across the country have been ramping up raids on the homeless, stealing coats, blankets, and other personal items and leaving those on the street with no protection from the cold and rain.

The Homelessness San Diego Facebook page recently posted a video of city workers conducting an “encampment sweep” that was recorded by homeless advocate Michael McConnell. According to CW6, “the city says it routinely posts clean-up notices downtown as part of its regular weekly abatement schedule.”

The video taken by a bystander went viral after being shared by the ACLU of Colorado’s Facebook page. It was swiftly followed up by an open letter to Denver Mayor Michael Hancock, Denver City Council, and city officials. The letter, which expresses horror at the willingness of the local government officials to endanger the lives of the homeless, “demands that the City immediately (1) direct its police officers to cease confiscation of blankets and other survival gear possessed by people experiencing homelessness, (2) suspend enforcement of the Denver Urban Camping Ban through the winter months, using that time to explore alternative approaches to homelessness that do not criminalize people for having nowhere they can afford to live and (3) end the coordinated sweeps of people experiencing homelessness, whether they are conducted through police, public works, private security, all of the above, or any other means.”

This is not the first time Colorado authorities have come under fire for their brutal treatment of the homeless. In February of this year, Denver Law School released a report called Too High A Price: What Criminalizing Homelessness Costs Colorado, which examined the economic and social cost of the anti-homeless laws. According to the paper, “Laws that criminalize panhandling, begging, camping, sitting or lying in public, and vagrancy target and disproportionately impact homeless residents for activities they must perform in the course of daily living.”

Los Angeles deployed an entire task force to crack down on homeless people, imposing their own “encampment sweeps” in September. The ironically named “Homeless Outreach and Proactive Engagement” teams are supposed to help reduce the number of people living on the street, but they appear to be doing nothing more than turning those who are less fortunate into criminals.

The ACLU declared a small victory over the summer when it successfully defended the rights of a man charged with trespassing after trying to gain access to emergency shelter. According to Jessie Rossman, a staff attorney with the ACLU of Massachusetts:

“Today’s landmark, unanimous ruling has affirmed, e.in the state high court’s own words that ‘our law does not permit the punishment of the homeless simply for being homeless.’”

Anti-homeless laws are cruel, unconstitutional, and create more hardship for those targeted, making it harder for them to get back on their feet. It is unthinkable to believe that stealing blankets and clothing from people living on the street is justifiable by any legislation, and it is terrifying to see law enforcement follow orders to do so without blinking an eye.