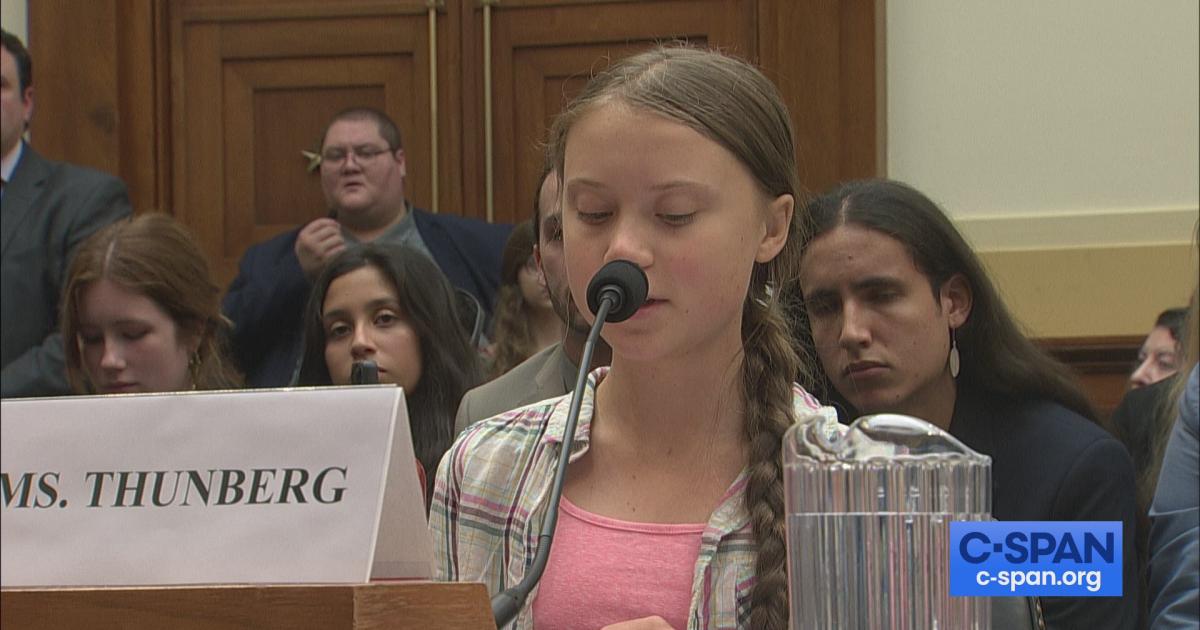 No, thank YOU, Greta and everyone taking climate action.
We’re #UniteBehindTheScience! ✊ pic.twitter.com/FQt4PsWnLg

Thunberg appeared at a joint hearing of the U.S. House Committee on Foreign Affairs Subcommittee on Europe, Eurasia, Energy, and the Environment and the Select Committee on the Climate Crisis.

The Special Report on Global Warming of 1.5°C (pdf) that Thunberg submitted was released last October by the U.N.’s Intergovernmental Panel on Climate Change (IPCC). Warning that “climate change represents an urgent and potentially irreversible threat to human societies and the planet,” the report called for “rapid, far-reaching, and unprecedented” reforms on a global scale to avert climate catastrophe.

Don’t listen to me, says @GretaThunberg, listen to the scientists. She just submitted this @IPCC_CH report to Congress. https://t.co/mxBlEibqKT pic.twitter.com/xnVe1PymSv

Thunberg’s decision to submit the report as her testimony was widely praised by other climate advocates.

“Yes!” tweeted the Natural Resources Defense Council. “Greta Thunberg is telling us exactly what the scientists have been saying for years—we have to rapidly reduce emissions to protect all humanity together. Starting now. No more excuses.”

Bill McKibben, co-founder of the environmental advocacy group 350.org, praised Thunberg as “one great politician” and “a master of the gesture.”

.@GretaThunberg is one great politician. Instead of testifying she simply hands the Foreign Relations committee a copy of the IPCC report on 1.5 degrees. A master of the gesture

The joint hearing Wednesday also featured testimonies from Jamie Margolin, co-founder of This Is Zero Hour and a plaintiff in Piper v. State of Washington; Vic Barrett, fellow at the Alliance for Climate Education and a plaintiff in Juliana v. United States; and Benji Backer, president of the American Conservation Coalition.

“It doesn’t matter how many dreams we have. The reality is my generation is committed to a planet that is collapsing … Youth climate activism should not have to exist.” pic.twitter.com/SMOtvWuDOe

The hearing preceded a global week of action that will kick off with climate strikes worldwide on Friday. The demonstrations will coincide with the U.N. Climate Action Summit in New York City.

Thunberg traveled on a zero-carbon sailboat across the Atlantic to New York last month to participate in the strikes, summit, and other related events—including to deliver an another address to members of Congress Wednesday at 5 pm ET.

Global Climate Strike 20-27th of September:
4638 events in 139 countries on all continents.
And counting…

Everyone is welcome.
Everyone is needed.
Find your closest strike or register your own at https://t.co/ikOafwrNSk
Spread the word!#FridaysForFuture #ClimateStrike pic.twitter.com/ekrmeUx100

Editors’ note: In related news, United Nations Secretary-General Antonio Guterres will block various countries including the United States from speaking at the UN Climate Action summit because they haven’t taken enough steps to deal with the issue.