A spokesperson for the U.N. chief warns the intergovernmental organization “runs the risk of depleting its liquidity reserves by the end of the month and defaulting on payments to staff and vendors.” 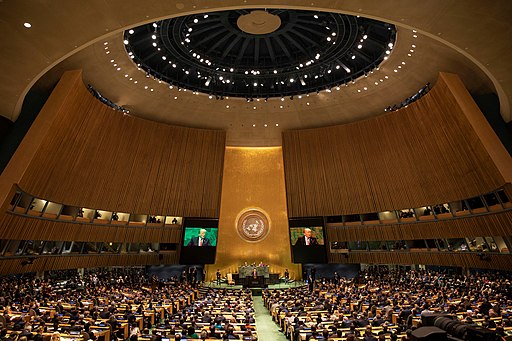 With a Wednesday morning tweet, U.S. President Donald Trump cast a global spotlight on the United Nations’ multimillion-dollar funding crisis and the over $1 billion in budget payments the United States owes the world body.

In response to a CBS News report that United Nations Secretary-General António Guterres sent a letter Monday to the 37,000 employees at the U.N. Secretariat notifying them of the deficit, Trump tweeted, “So make all Member Countries pay, not just the United States!”

CBS, which obtained Guterres’ letter, reported Tuesday that the U.N. chief expressed concerns about being unable to cover staffers’ salaries and the organization’s bills—and mentioned various moves to save money, from postponing conferences and meetings to scaling back services and travel.

“Member States have paid only 70 percent of the total amount needed for our regular budget operations in 2019,” Guterres wrote in part. “This translates into a cash shortage of $230 million at the end of September.”

Though the U.S. is the U.N.’s largest contributor, it currently owes the organization more than $1 billion. Citing the U.S. mission to the U.N., USA Today reported Wednesday that “Washington owes the U.N. $381 million in back payments and $674 million this year.”

Stéphane Dujarric, a spokesperson for Guterres, said in a statement Tuesday that the financial situation is “the worst cash crisis facing the United Nations in nearly a decade.” He warned that “the organization runs the risk of depleting its liquidity reserves by the end of the month and defaulting on payments to staff and vendors.”

“The Secretariat could face a default on salaries and payments for goods and services by the end of November unless more Member States pay their budget dues in full,” said Dujarric, summarizing Guterres’ letter. “The secretary-general noted that this is a recurrent problem that severely hampers the Secretariat’s ability to fulfill its obligations to the people we serve.”

Two-thirds of all U.N. members, 129 countries, have paid this year’s dues, which collectively total nearly $2 billion, according to Dujarric. The spokesperson told USA Today that the outstanding balance for the 64 countries that haven’t yet paid their regular budget assessments in full is $1.3 billion.

An unnamed U.S. mission official told USA Today that Washington has handed over $600 million to peacekeeping efforts in 2019 and will pay “the vast majority of what we owe to the regular budget this fall, as we have in past years.”

The Trump administration has a track record of bashing global cooperation and promoting sizeable cuts in U.S. funding for the U.N. along with the organization’s programs and peacekeeping activities.

During a speech to the U.N. General Assembly last month, Trump reiterated his complaints about “globalism.”