“We have not received a direct commitment from Secretary Esper that he will refuse commands from an illegitimate president,” lamented Rep. Mikie Sherrill. 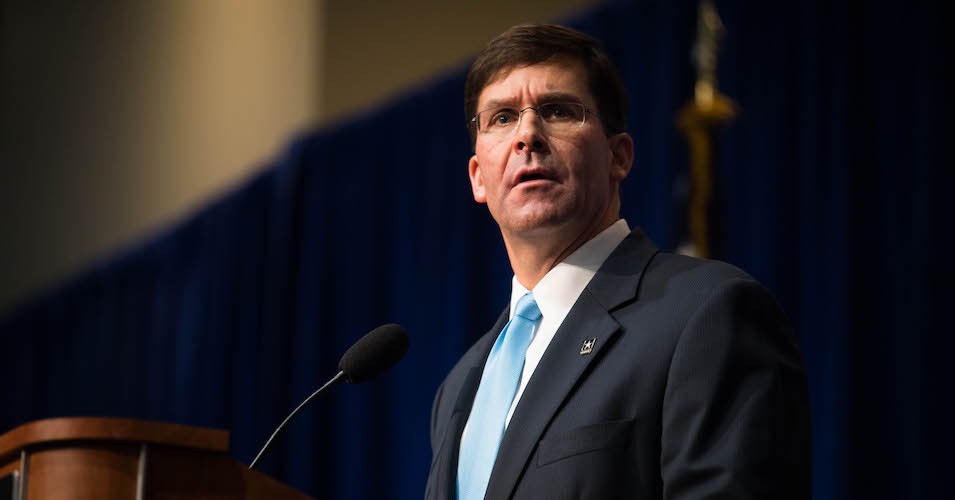 Defense Secretary Mark Esper has refused to rule out deploying troops during the 2020 election, raising alarm among some Democratic lawmakers, who urge him to definitively declare the military won’t interfere in the electoral process. (Photo: Staff Sgt. Nicole Meija/Joint Base Andrews/cc)

Democratic lawmakers on Tuesday called on Defense Secretary Mark Esper to definitively declare that U.S. troops won’t be used to influence the 2020 election after the Pentagon chief was evasive in written answers to questions about the role of the military in a peaceful transition of power.

Esper would only say that “the U.S. military has acted, and will continue to act, in accordance with the Constitution and the law.”

The representatives contrasted Esper’s stance to that of Gen. Mark Milley, chairman of the Joint Chiefs of Staff, who on Sunday emphatically ruled out such action.

“We have established a very long 240-year tradition of an apolitical military that does not get involved in domestic politics,” Milley told NPR. “We, the U.S. military, we are sworn to obey the lawful orders of our civilian leadership, and we want to ensure that there is always civilian leadership, civilian control of the military, and we will obey the lawful orders of civilian control of the military.”

Defense Secretary Mark Esper stopped short of committing to keep troops away from polling stations next month, prompting Democratic lawmakers to call on the Pentagon chief to vow that the military won’t be used to influence the electionhttps://t.co/YeIfZiiVwA

“This isn’t the first time that someone has suggested that there might be a contested election,” Milley continued. “And if there is, it’ll be handled appropriately by the courts and by the U.S. Congress.”

“There’s no role for the U.S. military in determining the outcome of a U.S. election. Zero. There is no role there,” Milley emphatically declared.

Slotkin, a former Pentagon official and CIA officer, said that Milley “answered in terms of what he would do as a cabinet-level official, but took a serious nod towards what he knows is the apolitical reputation of the military and demonstrated how important that was to him.”

“We heard no such thing from Secretary Esper,” she said.

Sherrill said that Esper “did not give us the sense that we could believe that he understood that this was such a critical time.” The retired naval officer called Esper’s answers “boilerplate.” She added:

We have not received a direct commitment from Secretary Esper that he will refuse commands from an illegitimate president. Given the fact that the president has used our military for partisan purposes in the past and that the president has suggested he will not concede if he loses, it is incumbent upon the secretary of defense to fulfill his constitutional duties and ensure the apolitical role of the military.

The lawmakers’ concern comes as the nation braces for a potential scenario in which the outcome of the presidential election is contested by President Donald Trump, who has incessantly attacked the legitimacy of the electoral process, especially mail-in voting.

MAIL-IN VOTING WILL LEAD TO MASSIVE FRAUD AND ABUSE. IT WILL ALSO LEAD TO THE END OF OUR GREAT REPUBLICAN PARTY. WE CAN NEVER LET THIS TRAGEDY BEFALL OUR NATION. BIG MAIL-IN VICTORY IN TEXAS COURT TODAY. CONGRATS!!!

The president has also alarmed many observers by refusing to commit to a peaceful transfer of power if he loses.

“We’re going to have to see what happens,” Trump told reporters in September when asked if he would step down after losing. “You know that I’ve been complaining very strongly about the ballots, and the ballots are a disaster.”

Slotkin and Sherrill urged Esper to provide a more robust statement against potential politicization of the military, noting his opposition earlier this year to the possibility of the president invoking the Insurrection Act in response to racial justice protests across the nation.

Esper publicly declared that the 1807 law should be invoked “only in the most urgent and dire of situations.”

“We are not in one of those situations now,” he added.

Army leaders said on Tuesday that they have not received any requests for either active-duty or National Guard troops to be deployed to deal with possible civil unrest during or after the November 3 election, the Associated Press reports.