“The Biden administration should immediately kill this toxic legacy of the former president.” 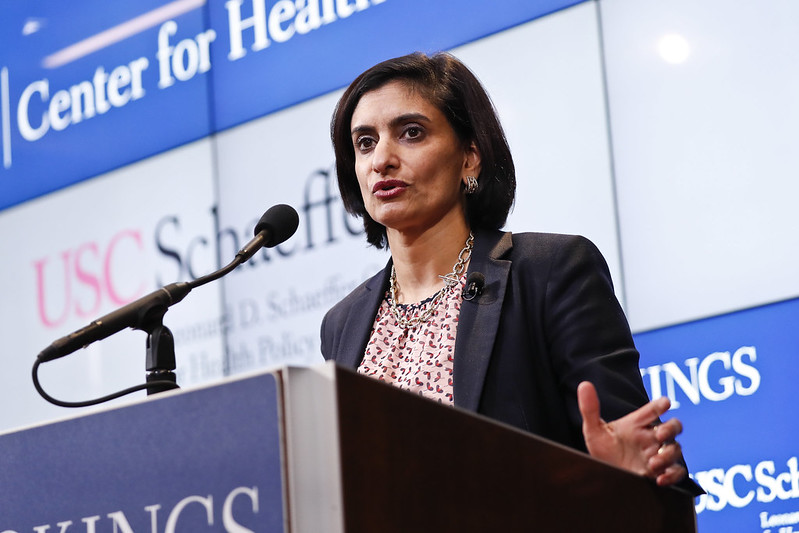 Seema Verma, administrator of the Centers for Medicare and Medicaid Services during the Trump administration. Photo: Paul Morigi/flickr/CC

A little-noticed scheme hatched in the late stages of the Trump presidency has consumer advocates and universal healthcare proponents warning about a creeping attempt to further privatize Medicare—an effort the Biden administration is being urged to stop in its tracks.

On December 3, the Centers for Medicare and Medicaid Services (CMS)—then under the leadership of Seema Verma—unveiled an innocuous-sounding proposal titled the Geographic Direct Contracting Model (Geo) with the purported goal of delivering “Medicare beneficiaries value through better care and improved quality.”

But a look beyond the plan’s technocratic exterior reveals what Center for Health Journalism reporter and editor Trudy Lieberman described earlier this week as a privatization model that could “take root and potentially turn every senior into a customer of a privately-run managed care organization.”

“Perhaps due to the wonky nature of the discussion,” Lieberman added, “the proposed change has generated almost no media coverage although it would upend the health insurance for millions of Americans.”

Diane Archer of Just Care USA, in a Monday op-ed for Common Dreams, similarly characterized Geo as “an experiment… that could fully turn Medicare over to private health insurers.”

“The Biden administration needs to halt this experiment before millions of older and disabled Americans lose their right to choose traditional Medicare,” Archer wrote.

Commonwealth went on to break down some of the specifics of the proposed Medicare experiment:

The Geo model creates direct contracting entities (DCEs), which will be responsible for quality and costs of care for beneficiaries in traditional fee-for-service (FFS) Medicare in designated regions. DCEs can be [Accountable Care Organizations (ACOs)], health systems, healthcare provider groups, or health plans.

CMS has identified 15 regions as potential sites and will select between four and 10. All are large urban areas, many in counties with the highest per capita Medicare spending in the country. In demonstration regions, virtually all beneficiaries in traditional Medicare will be required to enroll in a DCE, including people dually eligible for Medicare and Medicaid. Guidance from CMS emphasizes that beneficiaries’ out-of-pocket costs will not increase, and that cost-sharing or premiums could decrease if they use in-network providers. DCEs also may offer additional benefits, similar to Medicare Advantage plans.

The extent to which the Geo program resembles privately run Medicare Advantage plans was cause for alarm for Archer, who said that “overall, [MA] enrollees have less access to high quality hospitals and nursing homes than people in traditional Medicare and are subject to widespread and inappropriate delays and denials of care.”

“Like Medicare Advantage,” Archer continued, “the Trump experiment on traditional Medicare rewards insurers financially if they spend less on care, and each delay and denial contributes to larger corporate profits and jeopardizes access to care for the older and disabled Americans who need it most.”

Other critics of the plan—including the National Association of ACOs—have also questioned whether it would deliver on its promise of lower costs and high-quality care for Medicare beneficiaries or merely add another layer of complexity on top of America’s already-fragmented healthcare system, leading to confusion among patients and worse outcomes.

“The vast majority of beneficiaries will have no idea what a Geographic DCE is and what mandatory beneficiary participation will mean for their care and existing provider relationships,” the association warned in a letter to CMS in December. “This could disrupt existing care relationships and potentially create waste in the healthcare system at a time when resources are already stretched thin as we recover from the Covid-19 pandemic.”

Thankfully for Geo’s opponents, the experiment is not set to begin until January 2022—meaning the Biden administration has time to alter or scrap the plan. As Lieberman pointed out, Biden’s CMS recently announced that the Geo model is “currently under review.”

Archer, founder of the nonprofit Medicare Rights Center, argued that if the Biden administration lets the program proceed, Geo would “make traditional Medicare a gold-mine for for-profit companies, who will make money for executives and shareholders by establishing complex administrative rules that undermine access to care and by imposing high out-of-pocket costs that discourage care.”

“Allowing for-profit insurers to restrict access to care in traditional Medicare is a dangerous social experiment with the health and lives of the most vulnerable older and disabled Americans,” wrote Archer. “It’s bad policy, a government giveaway to Wall Street, and a betrayal of the most basic principles of Medicare.”

“Congress has given every older and disabled American the right to choose traditional Medicare,” Archer added. “The Biden administration should immediately kill this toxic legacy of the former president.”