“The United States is failing to investigate credible allegations of violations, to hold individuals responsible for violations accountable, and to provide prompt and adequate reparation.” 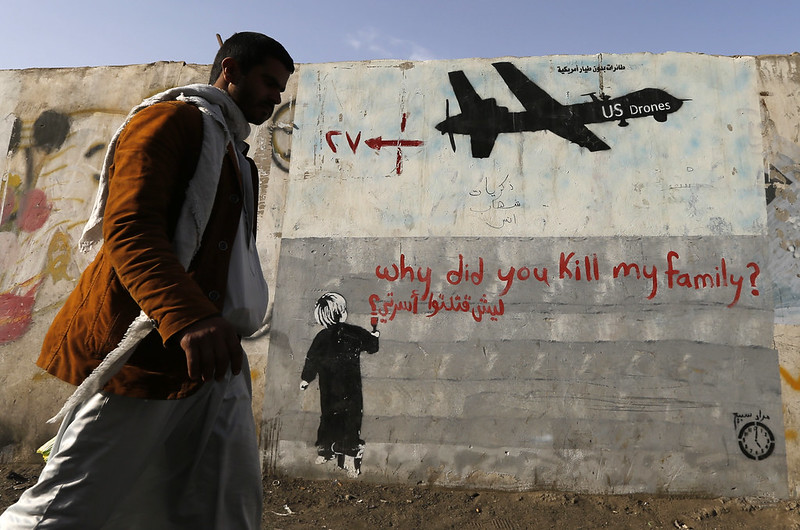 A report published Tuesday by Yemeni human rights defenders examines dozens of casualties resulting from U.S. drone strikes and other attacks on civilians in the war-torn nation in recent years, incidents the publication says often occur without accountability, investigation, compensation—and sometimes even acknowledgment.

The report—entitled Death Falling From the Sky: Civilian Harm from the United States’ Use of Lethal Force in Yemen (pdf)—was published by Mwatana for Human Rights. It covers a dozen U.S. military operations conducted between January 2017 and January 2019, a period during which then-President Donald Trump loosened the military’s rules of engagement that were meant to protect civilians.

“At least 38 Yemeni civilians, including 13 children, six women, and 19 men, were killed in these operations,” the report notes. “At least seven civilians, including six children, five of whom were under the age of 10, and one man, were injured. Civilians were going about their everyday lives—driving to visit friends, bringing food to their families, sleeping in their homes—when killed or injured.”

“These U.S. operations also caused other forms of deep and long-lasting civilian harm,” it continues. “The incidents led to adverse economic effects, killing primary breadwinners whose families relied on their incomes, and damaging and destroying important civilian property, including vehicles, homes, and livestock. The operations also caused significant social and psychological harm. In a few cases, surviving members of families left their homes following U.S. operations, saying they felt unsafe and worried about future strikes.”

We cannot turn away from the harms inflicted by our own government.

This report by our partners at Mwatana, a Yemeni human rights group, documents the devastating toll of US lethal strikes in Yemen.https://t.co/d7VF6B6rSU

The 12 U.S. attacks detailed in the report include 10 drone strikes and two ground raids in five Yemeni governorates—Abyan, Al Bayda, Shabwah, Hadramawt, and Ma’rib. In only one case did U.S. officials acknowledge harming civilians.

The report “raises serious concerns about the extent to which the United States is complying with international law in its use of lethal force in Yemen.”

“The United States is failing to investigate credible allegations of violations, to hold individuals responsible for violations accountable, and to provide prompt and adequate reparation,” it states.

1. Days before a #US raid killed at least 15 Yemeni civilians — including 10 children under the age of ten and four women — one US General wrote to another, “Good hunting…”

New @MwatanaEn report on the #US use of lethal force in #Yemen out today.

3. @MwatanaEn report, out at 6pm Sanaa, looks at 12 US operations during Trump Administration.

What happened under Trump can only be understood in wider context of #US approach to “counterterrorism” @BarackObama dramatically expanded use of drones across globe, incl in #Yemen

Among these was Nawar al-Awlaki, an 8-year-old U.S. citizen who, according to her grandfather, “was hit with a bullet in her neck and suffered for two hours.” Nawar’s father, Anwar al-Awlaki, a radical cleric, and her brother Abdulrahman al-Awlaki—both American citizens—were also killed in separate U.S. drone strikes.

Barzan Mohammad Abdallah Mabkhout Al Amir, then 10 years old, was the only member of his immediate family to survive the Yakla attack.

“We were all asleep when we suddenly heard the shooting,” he told the report’s authors. “Our mother gathered us in one room to protect us. My grandfather was immediately killed after he left the house. The house collapsed and my mother, father, and siblings were all killed.”

After denying that the raid killed any civilians—standard U.S. operating procedure—and calling the attack “very successful” despite the death of a Navy SEAL, American officials belatedly conceded that civilians including children were “likely killed.” CENTCOM, however, blamed AQAP for allegedly “hiding women and children within militant operating areas and terrorist camps.”

The Mwatana report notes that “regardless of which president or party controlled the White House, the United States has never fully investigated the civilian cost of its operations in Yemen, has never taken sufficient steps to review the efficacy of these operations, and has never provided civilian victims the acknowledgment, apology, and reparations they are owed.”

To remedy this, the report recommends U.S. officials “abide by all applicable international law requirements” regarding the use of force in civilian areas; “robustly investigate” reports of civilian harm; acknowledge, apologize, and compensate when U.S. forces kill or injure civilians; and cooperate with United Nations and other investigations.

These steps, the report says, “can go a long way towards disrupting cycles of violence.”

“For years, the U.S. has contributed to fueling and furthering conflict in Yemen,” it states. “It is entirely possible to change course.”

American military operations in Yemen occur alongside the much larger—and deadlier—U.S.-backed Saudi-led war against Houthi militants. According to the U.N. Office for the Coordination of Humanitarian Affairs, the nearly seven-year conflict—widely recognized as the world’s worst humanitarian crisis—has directly or indirectly claimed at least 233,000 lives. Other U.N. agencies warned last month that more than two million Yemeni children under the age of five would likely suffer acute malnutrition this year and as many as 400,000 of them could die if not quickly given desperately needed treatment.

A report published Wednesday by the international charity Save the Children revealed that children made up around a quarter of the war’s casualties in the years 2018 to 2020.

“If the Biden administration were to adopt the recommendations outlined in this report, it would constitute a significant step towards transforming the United States’ relationship to Yemen,” it concludes. “In the end, the best approach the U.S. can take towards Yemen is beginning to listen, heed, and support the many Yemenis already working to build a country that centers rights respect, peace, and justice.”