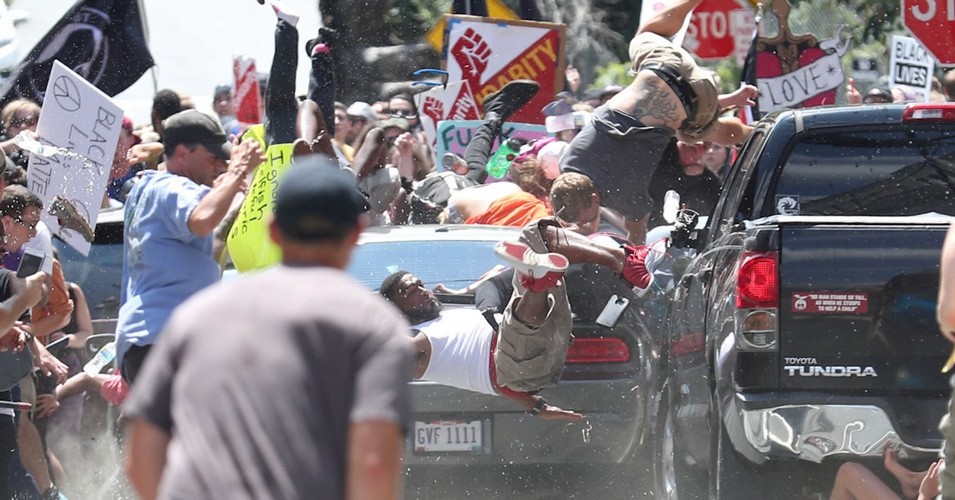 Tulsa Public Radio reports the state Senate passed H.B. 1674 (pdf) by a largely party-line vote of 38-10. If signed by Republican Gov. Kevin Stitt, the measure will grant civil and criminal immunity to drivers who “unintentionally” kill or injure people while “fleeing from a riot” if they have “reasonable belief” that doing so will protect them from harm.

Additionally, the proposed legislation would punish protesters who block traffic with up to a year behind bars and a $5,000 fine.

H.B. 1643 (pdf)—which criminalizes the online sharing of identifying information about police or public officials “with the intent to threaten, intimidate, or harass” them—was also approved by the state’s upper chamber in a 39-8 vote.

Arguing in favor of H.B. 1674 ahead of the vote, state Sen. Rob Standridge (R-15) repeatedly referred to a May 2020 incident in which a pickup truck driver towing a horse trailer plowed through a crowd of Black Lives Matter protesters, injuring numerous people including a man who was paralyzed. The driver, who claimed he feared for his life, was not charged.

“This bill will protect innocent people trapped by a rioting mob,” said Standridge. “Why would we wait for somebody that’s fearing for their life to be charged by a DA that wants to make a political case of something? We see this around the country. We don’t need it here. So, let’s just put it on the books.”

State Sen. Kevin Matthews (D-11), who is Black, objected to the frequent use of the word “riot” in the bill and by his GOP colleagues. Matthews noted that similar language is often used to describe the infamous 1921 massacre of Black people in his hometown of Tulsa.

“Let me give you some context,” said Matthews, who leads the 1921 Tulsa Race Massacre Centennial Commission. “In my community, people were bombed from the air. People had cannons shot into our churches. Some accounts, 300 people dead and businesses burned down. And it was said that my people were ‘rioting.'”

Matthews added that “it’s not cute and it’s not cool that we’re trying to address what happened across America in passing every piece of legislation to keep people from protesting when African Americans are killed unarmed.”

Another Black lawmaker, state Sen. George Young (D-48), said that “the foundation of this bill is to keep institutional racism alive. Many of you may not agree with that, but you got to look at it beyond your own positions and look at it through the eyes of others who this type of legislation would impact.”

Anti-freedom bills, like HB 1643 and HB 1674 will chill dissent, and silence and criminalize Oklahomans who want to exercise our First Amendment right to peacefully protest. https://t.co/ZaaGclRHzw

Critics of the bills including civil rights campaigners warned that the measures further endanger Black lives. Some pointed to the more than 100 incidents in just over three months last year in which drivers—both civilian and police—struck people at racial justice protests following the Minneapolis police killing of unarmed Black man George Floyd.

Others recalled Heather Heyer—a white woman who was killed in August 2017 when a white supremacist ran her over while she protested against the Unite the Right rally in Charlottesville, Virgina.

Jess Eddy, an anti-racism campaigner, told The Oklahoman that “those of us who have been organizing protests in the streets—what the United States Supreme Court has protected and established as one of the most sacred free speech forums—will now have to take extraordinary and dangerous measures to protect ourselves and our rights in Oklahoma.”

I got hit by a car driving through our protest in Tulsa on May 30 and then witnessed several more throughout the year.

The OK legislature wants us dead.

The ACLU of Oklahoma condemned both of the bills, with the civil liberties group’s executive director, Tamya Cox-Touré, asserting in a statement that “the Oklahoma Legislature is attempting to silence the voices of their constituents and criminalize vital calls for accountability and racial justice.”

“What is unbecoming is the fact that these anti-freedom policies are passed with a veil over their true intentions—to chill speech, criminalize accountability, and let us all know that a majority of the legislature cares more about protecting the deadly power of the state than they do about rights and liberties, or even public safety.”

H.B. 1674 is one of many anti-protest measures that have been recently passed or proposed in more than a dozen states. Bills granting immunity to motorists who strike protesters under certain circumstances have been introduced in numerous states.