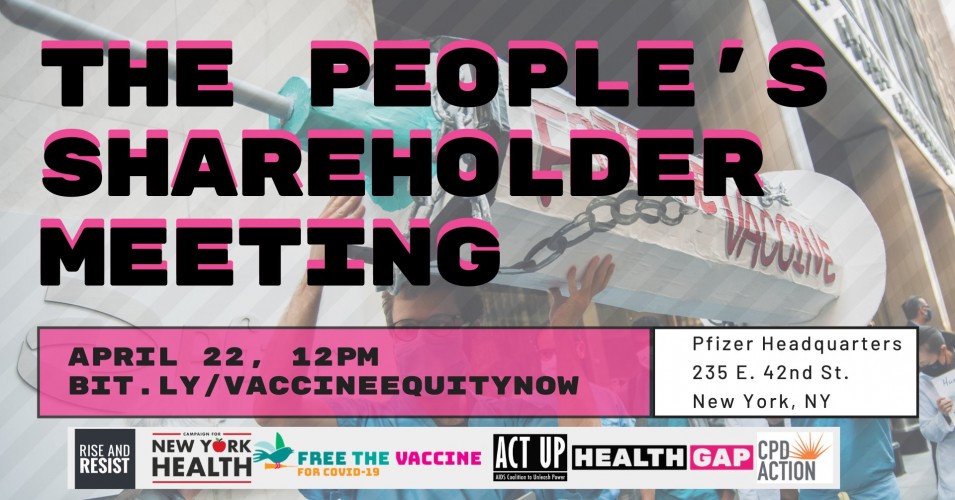 In the coming days, public health campaigners will gather at the headquarters of Pfizer, Moderna, and Johnson & Johnson in an attempt to push the major drugmakers to share relevant technology through the World Health Organization’s Covid-19 Technology Access Pool.

In addition, the groups will call on Biden to stop blocking a popular proposal—one backed by over a hundred nations—to waive the World Trade Organization’s Agreement on Trade-Related Aspects of Intellectual Property Rights, or TRIPS, for the duration of the pandemic.

The first action happened on Thursday at 12:00 pm ET in New York City, home to Pfizer. At 4:00 pm ET, a similar event took place not far away in New Brunswick, New Jersey, where Johnson & Johnson is based.

FACT: @Pfizer has spent the past year making BILLIONS of dollars in profits while people continue to die from #COVID. It’s time to #FreeTheVaccine so the whole world has access to these life-saving vaccines! https://t.co/X3VaIEPamS

Moderna’s annual meeting is scheduled for Wednesday, April 28 in Boston, where shareholders can expect to be greeted by demonstrators calling for prioritizing the lives of human beings over the bank accounts of super-rich pharmaceutical executives and investors.

A new report published earlier Thursday revealed the extent to which Big Pharma’s profits are being put above the well-being of billions of people.

According to the People’s Vaccine Alliance, just three companies—Pfizer, Johnson & Johnson, and AstraZeneca—have paid out a combined $26 billion in dividends and stock buybacks to their shareholders over the past year, a sum that could fully fund the cost of inoculating Africa’s entire 1.3 billion-person population.

The coalition behind the current week of action has identified Big Pharma and its powerful government allies as key impediments to the expanded production and equitable distribution of coronavirus tests, treatments, and vaccines because the WTO’s intellectual property rules have enabled a few corporations to monopolize publicly funded knowledge and prevented generic manufacturers from replicating proven formulas.

URGENT ACTION! Join us and the @peoplesvaccine #AskTheCEO ‘s of big pharma if they intend to put people before profit. They must suspend patents, and share the tech & know-how of #COVID19 vaccines to keep us all safe.
RT to take action: https://t.co/aShkdvIehw pic.twitter.com/Q5iWYSlk1p

Although the TRIPS waiver proposal, first introduced by India and South Africa last October, is supported by a large majority of the WTO’s members, a handful of wealthy countries in the Global North—including the U.S., U.K., and states in the E.U.—have sided with Big Pharma to uphold patent protections, thereby obstructing the sharing of vaccine recipes and other vital medical technologies during a pandemic that has killed more than three million people globally.

As the virus continues its deadly march throughout the world and experts warn that refusing to drop vaccine patents means that millions of people in Africa, Asia, and Latin America won’t be inoculated until 2023 at the earliest, opponents of the TRIPS waiver have come under increased pressure to reverse course.

Rapid and widespread inoculation is a matter of life and death—not only in impoverished countries, which have received just 0.2% of the more than 950 million vaccine doses that have been administered worldwide, but also in the relatively wealthy nations that have received 83% of the world’s doses so far.

Epidemiologists have repeatedly warned that the longer it takes to vaccinate the entire world, the more opportunities the virus has to mutate. Many estimate that the world has “a year or less” before vaccine-resistant variants spread widely enough to render a majority of first-generation vaccines ineffective.

The staggering gap between the number of doses administered in the developed world compared with the developing world—a manifestation of inequality that critics have dubbed “vaccine apartheid”—threatens to prolong the pandemic everywhere, resulting in the preventable suffering and deaths of potentially millions of people as well as billions of dollars in avoidable economic losses.

The U.S., which is sitting on hundreds of millions of excess doses, as well as other rich countries hoarding shots, have attempted to deflect criticisms by drawing attention to their donations to COVAX, a United Nations-backed effort to ensure that vaccines are allocated to low-income nations.

Progressives have long warned that COVAX is not up to the task of bringing the pandemic to a swift end. That skepticism was confirmed by a new analysis released Thursday, which shows that the initiative has delivered just over 20% of the Oxford/AstraZeneca doses it promised by next month.

Health justice advocates pointed to the shortfall as further evidence of the need to temporarily suspend coronavirus-related intellectual property rules and ramp up global manufacturing of vaccines.

There is a growing backlash against the de facto privatization of successful #COVID19 vaccines and pressure on the pharma firms to openly license the intellectual property and share the technology & know-how with qualified vaccine producers across the world.#PeoplesVaccine pic.twitter.com/NKUwOk7hT8

In addition to the more than 100 countries calling for a vaccine patent waiver, the list of individuals and groups demanding a people’s vaccine continues to grow. It includes hundreds of civil society organizations in the U.S. and abroad; WHO Director-General Tedros Adhanom Ghebreyesus; multiple Nobel prize-winning economists; scores of former heads of state and government; and dozens of Democratic lawmakers.

With momentum for a patent waiver building, the coalition behind the current pressure campaign hopes to shed light on Big Pharma’s profiteering and persuade Biden to help end vaccine apartheid.

This Friday, Sen. Bernie Sanders (I-Vt.) will lead a delegation of congressional lawmakers, civil society organizations, and labor unions in delivering two million petition signatures in favor of waiving vaccine patents to Biden ahead of a pivotal May 5-6 meeting of the WTO.

In addition to millions of petition signatures, a recent Data for Progress poll showed that 60% of U.S. voters want Biden to join the majority of the world’s leaders in supporting the proposal for a temporary suspension of pandemic-related patent protections.

A banner calling for a people’s vaccine will be dropped at the Bill and Melinda Gates Foundation, located in Seattle, on Sunday. Bill Gates is a chief proponent of the intellectual property regime that is undermining global vaccination efforts and putting millions of lives at risk.

Campaigners have planned additional demonstrations to take place in Washington, D.C. on May 5, the first of a two-day WTO meeting when the fate of the TRIPS waiver, a measure that requires the support of all 164 member nations, will be decided.

In the absence of a patent waiver, “millions of people in the Global South will not get access to the vaccine until 2024,” tweeted People’s Action. “This means we won’t end the pandemic, millions of people will die, and the global economy will suffer.”