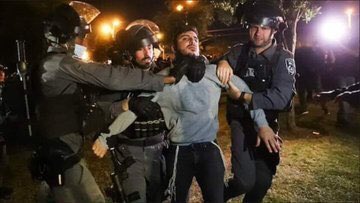 This struggle also belongs to those who became refugees within their homeland, but who were not allowed to return to their homes and villages because they were kept out by policies facilitating the Israeli takeover of their lands. This is now the struggle of yet another generation that has inherited the collective dispossession of its people, as in Haifa and Gaza, and is undergoing it again in such places as the Naqab and the Jerusalem neighborhood of Sheikh Jarrah.

And it is the struggle of all those who were dispossessed and continue to be dispossessed, not only by war, but through mundane and ongoing legal and bureaucratic means that seek to convert settler-colonial politics into technicalities of property law.

The ongoing struggle of the dispossessed reveals the repetitiveness of dispossession – the impossibility of an aftermath. But it also reveals what it means to live in struggle, to refuse defeat, to persist.

The toll is heavy. But the alternative is surrender to injustice – capitulation.

Still, at issue is not only persistence, determination, and perseverance as activities and attitudes; these political sensibilities are cultivated for a reason. And this reason concerns the temporality of the settler-colonial project, which refuses to limit its dispossession of Palestinians to a time past, to let it become history.

But then again how could this dispossession become history if from the start its logic presumed Palestine’s limitless availability to Zionist colonization?

Given Palestine’s resistance to Zionist settlement, it has had to be forcibly constituted as always already available for colonial settlement over and over again. Hence the infinite, repeated Israeli dispossession of Palestinians.

The dispossessed are familiar with this endless temporal repetitiveness; it is inscribed in their memories and on their flesh. Their struggle must guard against it. Their struggle is on alert, anxious about yet another takeover, another expulsion from homes. It is always apprehensive, always prepared to confront the interminable Israeli dispossession of Palestinians.

And if the Nakba, the word that illuminates catastrophic dispossession par excellence, is not an event that belongs to the year 1948, but a constantly reconstituted condition of Palestinian life, then guarding against another Nakba has become structural within this history and intertwined with Palestinian life itself.

Constant preparedness, vigilance, and willingness to rise up are the alphabet of the struggle of the dispossessed. The aim is to tame, obstruct, and hinder the settler-colonial machinery. But along the way, the dispossessed renew more radical collective aspirations: to break the machinery of dispossession, disconnect it from its source of energy, undo this itinerary of injustice.

They are not tired, but they are fed up. They no longer want to orchestrate their resistance within this ongoing, repetitive temporality, an infinite response to an infinite dispossession; they want to break free from the time and the space of the boundless and borderless settler-state. Not because they are fatigued, but because they dare to dream of other futures in which they cease to be colonized, and in which they can begin to engage in other struggles.

From the two sides of the Green Line, from Nazareth to Haifa to Jaffa to Jerusalem to Nablus and Ramallah, Palestinians carry the memories of their past dispossession from their lands and the practices of ethnic cleansing to which they were subject.

On the 73rd anniversary of the Nakba, commemorated on 15 May, they are prepared to confront this round of expulsion, and in doing so they also prefigure a future that would undo the dispossession that has separated them into several groups: ’48 Palestinians (also known as Palestinian citizens of Israel), occupied subjects in the West Bank, besieged Gazans, and refugees living in Palestine and in the diaspora.

Each group insists on togetherness and collectivity in the face of partition and dismemberment. And there are also Jerusalemites. Neither citizens nor subjects, Palestinian Jerusalemites have forcibly become Israeli residents. This status is a colonial instrument of rule. It does not extend political rights, but it is sufficient to distinguish Jerusalemites from the occupied subjects in the West Bank, thereby facilitating East Jerusalem’s annexation to Israel. An intermediate legal status between citizen and subject, the resident status offers neither the tentative safety of citizenship nor the guarantees of protection under the international laws of occupation, as theoretical as they may be.

It is a status of legal fragility. And yet it is this very status that allows Jerusalemites to challenge the division of the Palestinian population into citizens and subjects. And because the residents of Sheikh Jarrah are also refugees in their homeland, they articulate, in the sense of condensing, the different fates of Palestinians: citizens, subjects, and refugees. They illuminate a shared Palestinian condition of dispossession along with the paths of struggle to break dispossession’s vicious, cyclical temporality.

A path of their own

The struggle of the dispossessed takes form within this interminable dispossession, responds to it, and attempts to counter its catastrophic consequences. Along the way, it also charts paths to terminate the machinery of dispossession.

And from this struggle of countering and terminating, a Palestinian collectivity is regathered and articulated. Abandoned by the Arab states and left to suffer the whims of the settler-colonial machinery, the dispossessed must find their own path.

Confronted by one of the most powerful member states of international society, their fight is not fearless, but courageous. In a historical time that has become postcolonial, and in an international order that no longer supports anti-colonial movements, it is left to us, the communities of this earth, on the 73rd anniversary of the start of the Nakba, to grasp the extreme conditions under which Palestinians remain steadfast in their struggle, and to reactivate, in concert with them, an anti-colonial impulse to bring to a halt the machinery of settler-colonial dispossession.