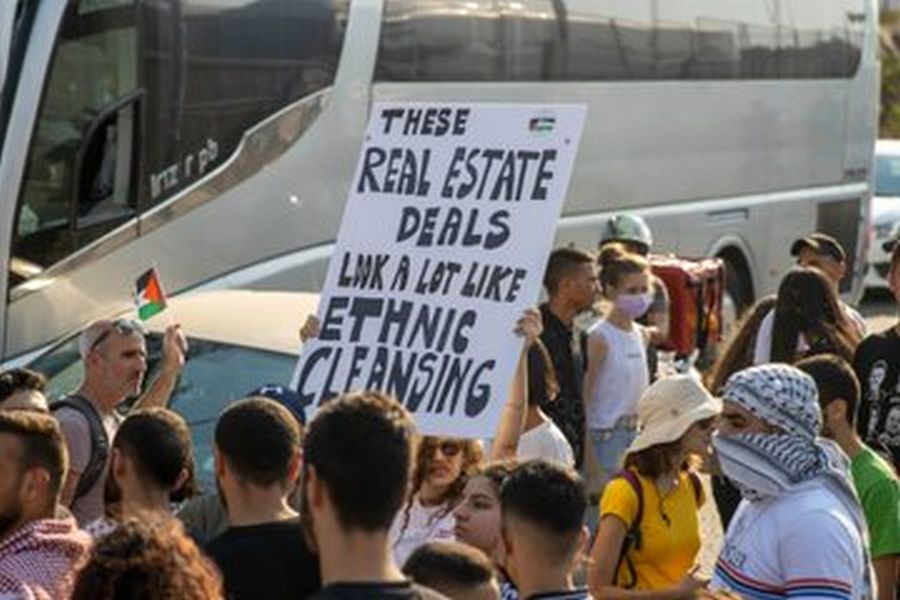 Under the Israeli high court proposal, four Palestinian families and dozens of others threatened with forced expulsion from the Sheikh Jarrah area would remain in the neighborhood as “protected tenants” who could not be evicted, as long as they acknowledged that Nahalat Shimon Company—a right-wing settler organization dating back to the early years of Zionist colonization of Palestine—as the lawful owner, and paid it NIS 1,500 ($465) in annual rent.

As Israeli journalist Nir Hasson wrote for Haaretz on Tuesday:

The problem isn’t the money but the question of recognizing Nahalat Shimon as the owner. The Palestinians refuse to. For their part, representatives of the settlers demanded explicit Palestinian recognition of ownership of the land under the buildings and a promise not to raise further claims in the future. The Palestinians resolutely refused.

“The minute we pay rent for our homes, it means we have given up ownership,” Alaa Salayma, who faces eviction from Sheikh Jarrah, told Middle East Eye. “This is not an option. We are the owners of these homes.”

‘I don’t think this system will ever be fair or just to me.’

A final verdict on the expulsion of Palestinians from their homes in occupied East Jerusalem’s #SheikhJarrah has been deferred after the Israeli Supreme Court said it has not heard sufficient arguments from both sides. pic.twitter.com/o0EnKOE0uY

Palestinian writer Mohammed El-Kurd—whose family’s harassment by an Israeli settler admitting on video to trying to steal their home made global headlines in May—told Middle East Eye, “I don’t think this system will ever be fair or just to me.”

El-Kurd added that “this entire country was established on land theft and stealing homes from Palestinians,” who were ethnically cleansed from what became the modern state of Israel in 1948-49, 1967, and during home demolitions and settlement expansion, which are ongoing.

The vast majority of Palestinians in this Sheikh Jarrah court hearing – which could determine the course of their entire future – do not understand a single word being said as it’s all in Hebrew. Those who understand a little are whispering translations to those sat next to them.

It was during the 1967 conquest of territories including the West Bank, Gaza, and East Jerusalem that Israel seized and occupied Sheikh Jarrah. Israel illegally annexed East Jerusalem in 1980. Lower Israeli courts have upheld the planned expulsion of Palestinians from the neighborhood.

However, in May, the United Nations Office of the High Commissioner for Human Rights (OHCHR) Spokesperson Rupert Colville, citing the Fourth Geneva Convention’s prohibition on the forcible transfer of populations by occupying powers—under which Israel’s occupation of Palestine and its settlement activity are illegal—said that any Sheikh Jarrah expulsions “may amount to a war crime.”

El-Kurd told the BBC that residents faced “a lot of pressure” to “reach an agreement with the Israeli settlers in which we would be renting from the settler organizations. Of course this is rejected.”

“We would be living at the mercy of settlers, paying rent to live in our own homes, and dealing with all kinds of arbitrary policies,” he told Democracy Now!, adding that he believes the Israeli high court is “evading its responsibilities” by refusing to issue an ownership ruling.

If the journalists you’re reading/watching use the words “rent,” “tenant,” or “dispute” in their coverage of #SheikhJarrah, they’re repackaging Israeli gov press releases.
Journalism should help access facts and understand context, not groom you for submission to colonizers. https://t.co/VJkegtzHxF

While Israeli Supreme Court Justice Yitzhak Amit said that the court’s offer “will give us breathing room,” Nahalat Shimon—which wants to resettle Sheikh Jarrah with Jews—also rejected the proposal, with Ilan Shemer, an attorney for the group, calling it “an empty arrangement.”

In the end, the Sheikh Jarrah legal battle revolves around one question. Is it simply a real estate dispute, as the settlers assert, or is it part of a campaign by the state—its official arms (the custodian general, Land Registry, the Israel Police) and its unofficial ones (the Nahalat Shimon Company) to dispossess the Palestinians and Judaize the neighborhood? If it’s the latter, it’s a campaign based on discrimination and unjust laws.

The imminent expulsions of families in Sheikh Jarrah and Al-Bustan earlier this year, as well as simultaneous attacks on worshippers at the Al-Aqsa mosque compound, sparked worldwide protests and escalating Israeli attacks and Palestinian resistance.

In May, Israeli forces bombarded Gaza for 11 days, killing 260 Palestinians including at least 66 children, while 13 Israelis died, mostly from Palestinian rocket attacks.

The two sides’ rejection of the justices’ Sheikh Jarrah offer means the Israeli high court must now make a final decision in the case.

Following the court session in regard to forced expulsion of four Palestinian families in the neighborhood of Sheikh Jarrah, IOF cracked down on the neighborhood and brutally assaulted Palestinian indigenous inhabitants and detained several youths, today.#SaveSheikhJarrah pic.twitter.com/6dk5fyZXUz

Asked about the court’s offer during a daily press briefing on Monday, Stéphane Dujarric, spokesperson for United Nations Secretary-General António Gutteres, said, “What has always been our standpoint is that all settlement activities, including evictions [and] demolitions, are illegal under international law.”

The United States also commented on the case on Monday, as State Department Spokesperson Ned Price said that “families should not be evicted from homes in which they have lived for decades.”